The 20Booksto50K author movement was birthed by Michael Anderle and came to London for the first time last weekend. As some 75 authors sat down to listen to the speakers, Craig Martelle, the host for the weekend, told us that since the event was sold out they could refund about a third of the cost of the conference to us.

With the value for money ratio of the conference thus radically increased, I was getting even more excited about what I was about to learn during the intense two days. 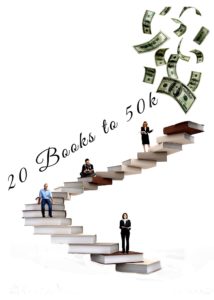 I’ve talked in the past about how I wanted to create an income of $50k a year by having a backlist of 20 books. I came up with this number because I noticed after the first few days of selling my first book, I was averaging about $7.50 a day in income. At that number ($7.50 a day for each of the 20 books) I’d make $54k. You only need $36k to enjoy a very nice retirement in Cabo San Lucas. That was my goal. – Michael Anderle

In other words, the more you write the more you earn. Of course, nothing is that simple. First of all, writing 20 books in a writers’ career takes commitment and time. Secondly, writing 20 books for a market that doesn’t either know about your books or for readers who don’t enjoy them gets you nowhere near that magical 50K. So you need to write good books and know how to market them. And this was what the roomful of serious authors was there to learn about. We all wanted to know how the 20Booksto50K speakers were each earning 4-5 digit figures a month from their writing alone.

Nothing here is prescriptive – we are just telling you what worked for us. – Craig Martelle

Here is a brief summary of what the 13 speakers had to say:

Word of mouth is still the best way to increase sales, but you can help that word of mouth along with advertising, mailing lists and engaging with readers and other authors on social media.

Mailing lists with your superfans are an excellent way to launch a book. If, before your book comes out, you already have a list of, say, 2,000 fans on your mailing list, think how this will affect the sales on that first day! Those sales will, in turn, increase the book’s visibility on Amazon and other online stores and will give you the valuable social proof of positive reviews.

Advertising to readers who are interested in the kind of books you write will also enable you to find your readers as will a good cover and blurb. (More on advertising below)

Have a good cover

You need a good cover which speaks to your readers and clearly displays your genre. This will be something that is similar but different to the ten best-selling books in your genre.

The book title and the author name need to be visible as a thumbnail, and you need your covers to have an author brand.

If the book isn’t selling, change the cover. I was surprised how many of the speakers had published their books with several covers before they found the one that worked.

If you’re on a budget, you can also do your own cover. A Scottish author, Barry Hutchinson, studied cover design online and came up with best-selling book sleeves for his comic Sci-Fi series.

(If you’re interested in learning about cover design, Mark Dawson, one of the speakers at 20Booksto50K course has a new online course out where his cover designer, Stuart Bache, shares all his secrets. It’s on an offer at $195 at the moment. Find out more here.)

On the first day of the conference a couple of authors had been brave enough to submit their Amazon blurb and cover for review and we learned what worked and what didn’t. These are the points that I came away with on blurb:

All you need to do is to write a good book; it doesn’t have to be a great book. – Barry Hutchinson, author of The Space Team comedic Sfi-Fi series

If you can, write a series. It’s also a good idea to have several entry points to the series. Best-selling author Abby-Lynn Knorr who moved to Venice after falling in love with an Italian man began writing when she found herself out of work. She wrote a Young Adult series of books which readers can start reading at any point. The story is told from 4 characters’ point of view. I found this ingenious and will definitely be trying this technique out myself.

Prequel novellas to give away are a good way to get readers interested in a series. This has definitely worked for me, so I can vouch for this technique. Sign up for a free novella here. 😉 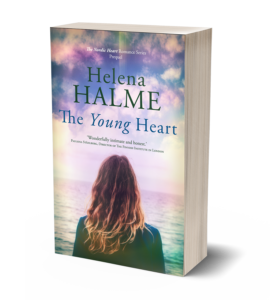 Have a Box Set of your books

Boxed sets do well too. The speakers spoke a lot about readers who read a book a day, and who consume series of books in the way that so many people now binge-watch TV series on Netflicks etc. Prolific readers like this love box sets. Because box sets are more expensive, it’s easier to make money from Facebook advertising as the margins are larger. On the other hand, if you run a $0.99 offer on a box set and do a heavy advertising campaign with the likes of BookBub, Facebook, and Amazon (AMS) ads, you have a chance to hit best-seller lists too.

Most of the panelists write 2,000 to 10,000 a day. I know this was what the core of the message of the 20Booksto50K movement, but I was still surprised at the proficiency of these successful authors. I try to write 1,000 words per day but sometimes I only manage 500. When I’m in the writing phase, or in the middle of a project, I can turn 3,000 words per day, but these guys said they’d had many 10,000 word days! What I took away from the two days was that I need to be in my ‘writing phase’ all the time if I want to make some serious money from my books. Easy peasy …

The prolific readers want prolific authors to provide them with a book once per month to keep their interest in the writer’s work. I know this a tall order for one author, but writers such as Faleena Hopkins (who gave a brilliant Keynote Address on the 1st day of the 20Booksto50K conference titled, ‘Fighting Demons, Achieving Dreams’) does this all on her own. She has a good editor, cover designer and she works intimately with them while writing 10,000 words per day. (I salute you!).

Another way to get books to market quickly is to collaborate with other writers. Michael Anderle, who started this whole movement, has now a team of authors who write books to a schedule. His imprint LMPBN Publishing is the team behind The Kurtherian Gambit and Oriceran Universes built by Michael Anderle and a host of other Independent Authors, Artists, Narrators, Production Editors, and fans. Many of the speaker at the conference were part of this imprint.

It was during the talks given by Michael Anderle, Craig Martell, and Martha Carr that really brought it home to me how much the publishing industry has changed since the emergence of the Kindle in November 2007. The traditional publishing model where there are several layers between the author and the readers, such as agents, editors, and publishers, is really stripped down to just a relationship between the author and the reader.

New co-operative models such as LMPBN are emerging, where authors come together and write books in an (in this case fantasy) series which enables them to provide the fans with a book a week, thus satisfying the thirst prolific readers have for the same kind of books.

What is so wonderful about this model is that not only does it increase the authors’ income (which, if you are a traditionally published author and not a huge name, is alarmingly low), but it also increases reading. If you give fans what they want, they want more of it. It’s win, win all around.

Of course, you do need to advertise to find those readers in the first place. Advertising is such a complicated subject, but below are the main points that I took away from this conference.

During the weekend, there were compelling arguments for and against going exclusively with Amazon Select for your eBook publishing.

Amazon has about 80% of the eBook market and pays authors for Kindle Unlimited pages read by its customers, which can add a significant amount to an author’s earning. Although there are no facts available (Amazon are notorious for not letting anyone have details of its sales figures), there is evidence that books within Amazon Select are also more visible on its virtual shelves.

Mark Dawson, a US Today best-selling thriller author, with a TV series based on his books in production has recently made the step to take one of his series into Amazon Select with some amazing sales figures as a result. Mark was able to invest a large sum in marketing the books during the changeover from other platforms to Amazon Kindle, which obviously made a difference for him.

Having an exclusive publishing agreement goes against the grain for me as an indie author, and I am fearful that I will become a one customer business, but the figures that Mark Dawson displayed made a compelling argument for Amazon Select membership.

Speaking for wide distribution, Draf2Digital‘s Dan Wood and Reedsy’s Ricardo Fayet, emphasized the benefits of having your eBooks as widely available as possible. Books available on Kobo, for example, sell well in Canada and those in iBooks in Europe. They reminded the audience that there are many English-speaking expats all over the world that we can sell through these other channels. Together with Barnes & Noble who have the Nook device, these platforms have also recently announced investment programmes in their platforms, to try to gain some market share from Amazon.

It’s also true that certain genres do well outside of Amazon. For example, genres that do well in iBooks are Romance and Mystery, something which I can vouch for. Since I rebranded The Nordic Heart romance series in December last year and went wide, some 20% of my sales for January 2018 came from iBooks alone.

Remember, everybody fails at least once

If you fail, move on and try again – Michael Anderle

Your book isn’t selling? Change the cover, change the blurb, try with Amazon Ads, BookBub Ads, Facebook Ads. Still not selling? Move on, write another book, and another series.

If you write 2,333 words per day, you can finish your first draft of a 70,000-word novel in 30 days. If you write 5,000 words per day that time comes down to 14 days. Think, you can send a manuscript to your editor once per month and start rolling those books every 5 weeks!

Many speakers during the weekend extolled the benefits of networking with other authors. With author collaboration ranging from sharing email lists, running free book campaigns together, or writing books together to world-building on the scale that Michael Anderle does, it’s worthwhile keeping in touch with your author friends and make new ones. I feel very lucky that I have great friends in the writer community, mostly made through The Alliance of Independent Authors, but also just through meeting like-minded people at conferences. 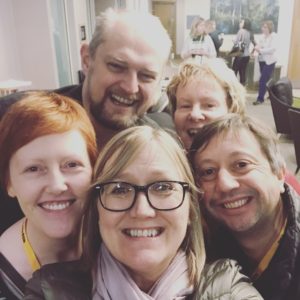 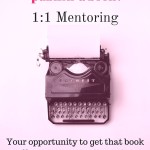 Get Ready for the Indie Author Fringe!