I must admit to feeling a little worse for wear this morning. My hangover has nothing to do with yesterday’s brunch venue, HEL YES! a Finnish pop-up restaurant in Islington. It has, however, everything to do with being Finnish. Which sort of makes sense?

With a good dose of sisu, a Finnish character trait which can best be described as foolhardy determination, Husband and I, plus some very good friends, drank through the day after a most excellent (albeit a little sparse) meal at the warehouse just off City Road in London where Finnish designers and chefs have created a magical restaurant on a theme of foraging.

There were birch tree canopies above the tables, signs and artwork made out of twigs adorned the walls of the warehouse, with contemporary Finnish design by Klaus Haapaniemi, the Creative Director of HEL YES!, in evidence everywhere.

The Iittala and Arabia crockery at the restaurant was sourced from donations made by the Finnish public. The food on offer was equally wild and earthy: I had white fish tartare followed by wild mushroom hash with a poached egg. Both dishes were excellent, but the portions were so small we were all relieved there was pudding to come. I had something which took me back to being seven again: whipped raspberry semolina. My grandmother (she of the leopard print habit) used to make it out of lingonberries, a slightly more tart and smaller version of cranberries. I’d have a bowlful with cold milk after school, and it was the best thing for a fussy eater: I rarely could stomach school food, but that’s another much longer tale. Others at the table had a liquorice dessert. I love anything liquorice and wish I’d been able to have both, but I’d tasted a similar dish at my very favourite London restaurant, St John’s Bread and Wine, so I had to choose the semolina.

My only regret (apart from the frolicking yesterday after the meal) was that we didn’t get to sit on one of the canopied round smaller tables on Alvar Aalto chairs. We were such a large group we had a long birch table with benches, the kind of dining room furniture I have always despised.

Brunching at the same time as us at the HEL YES! restaurant was Helena Puolakka, Executive Chef of Skylon restaurant at the Royal Festival Hall. (We were in good company.) And a little bird told me that she’s planning to open her own place. I’ve thought for a long time that there’s a real gap in the London food scene for a Nordic restaurant. With her considerable experience having worked with the likes of Pierre Koffmann and Gordon Ramsey, together with her talent for creating fresh tastes with traditional Finnish ingredients, Helena is the perfect person to open such a place. I do hope it’ll be soon. Husband said Helena should serve a sillis in her new restaurant for Sunday brunch. The lady just laughed – I’m not sure a breakfast of raw fish and vodka would suit everyone’s palette here in the UK, even though it’d be such a lot of fun for us. But there was a more enthusiastic approach to crayfish parties from the chef; she even claimed that the best crayfish in the UK come from our very own county of Wiltshire.

‘Should have set up that crayfish farm after all,’ Husband sighed as we walked out of the very Finnish bubble that was HEL YES! But I’m glad we didn’t. I’ve now become such a townie that the thought of having to wear wellies every day to babysit aggressive crayfish whose only aim in life is to kill each other made me shudder. I’ll just wait for Helena’s restaurant to open and get my crayfish neatly served on a plate.

August is for Crayfish 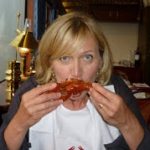 A crayfish party for two