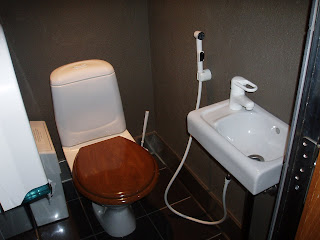 Inspired by my wonderfully funny blogging friend, Wildernesschic, I had to share with you some of my toilet observations while in .

Finns are the most practical people I know. (I should say ‘we’ Finns of course). It’s not surprising that Nokia has done so well in mobile technology, we have several inventions under our belt. Some like the Sauna are well known, others less so. But I think in this instance the practicality has been taken a little too far.

In every hotel room convenience, in any restaurant loo, and even in toilets at airports and train stations, a little shower head has been placed in a handy position next to the toilet seat. I’m not terribly well traveled, but apart from , I haven’t come across these anywhere else. The French have their bidets, but I doubt they have them in many public loos?

Whether it’s my filthy imagination, (I blame the writing – we writers have to consider all aspects of living, including toilet habits), but every time I see the showers, I always think that it’s so kind of that particular establishment to provide a way for working girls to clean themselves up in between sessions. Because who else in their right minds would think to have a little wash down there in a restaurant or bar?

The Kindness of Strangers

Is the She-pee the future for porcelain parity?