Our little dog, the border terrier needs regular hand stripping. That may sound exciting, but I promise you there’s no music involved, nor is there any slow removal of dog collars. It’s just a way to remove any loose hairs from his coat. It makes him more comfortable and ensures he drops less hairs onto my floor and clothes.

When we lived in the country we used to take him to a place in the nearest market town. Jerry loved going to visit the dog parlour, but we humans took lots on whose turn it was. None of us wanted to take him there, because in spite of its rather grand name, the dog ‘parlour’ was not like any ‘parlour’ I’d ever seen. It was a small, functional shop where two ladies worked with dogs amongst a lot of dog hair, wet dog smells and the occasional barks and accidents. To put it mildly, the place stank. The first time I ever took Jerry there I gasped at the door. The waft of strong dog smell hit my nostrils and instinctively I moved a few paces back. The dog saw something was up and promptly cocked his leg against the reception desk. The two ladies just laughed, ‘Oh, he’s not the only one to have done that!’ I nodded, I was having trouble talking while trying not to breath in.

It was lunchtime when I got the call that Jerry was ready to be collected. While I was handed the newly trimmed and very smart looking terrier back to me, I happened to glance inside the engine room of the dog ‘parlour’. There was one large poodle mid-strip standing on a steel counter.A white-furred Scottie was in a cage waiting for his turn and a couple of long-haired dogs were lying at the feet of one of the ladies I’d seen earlier. She in turn was happily leaning onto the counter, munching at a sandwich she’d taken out of a Tupperware box which lay right next to the dog, and a fair amount of dog hairs. On the other side of the counter I spotted another boxed lunch, and as my eyes turned to the lady now taking my payment, I saw she too was chewing at something. For a moment I forgot about the smell. All day I’d been feeling sorry for the two cheerful girls, thinking it must be awful to have to work with that smell all day long. But now I realised they can’t be bothered by it at all if they were prepared to eat at the same table where they stripped the dogs. Feeling a little queasy, I ran out of the door and from then on tried as hard as I could to delegate the task of taking Jerry to be stripped to some other poor unsuspecting member of the family.

So you can imagine my delight when one day soon after moving to London I saw this place out of the bus window. Though it looked decided girly, I thought my terrier would be man enough to pay a visit there. Surely this place wouldn’t smell?

They promised ‘grooming paw excellence’ on their website. The prices were slightly higher than in the country, but then that’s true of almost everything here in London. And as corny as their sales speak (‘Pawfect!’) sounded, it was so much more preferable to the old stinky ‘parlour’ in the sticks that I just had to take Jerry there. And boy did they do a good job on him. 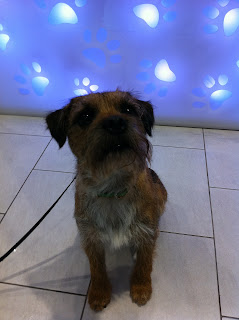 My butch terrier did look a little lost amongst all that fluffy, pink merchandise, but more importantly, I could linger in the shop, it was clean, it was friendly and Jerry had behaved. I was still nervous he might suddenly get a scent of something and feel the need to mark the shop as his own territory, but I tried to relax as I listened to the lady telling me how and which bits of him they’d cleaned: ears, paws, (including the bits between nail and the nail cushion – fancy that!) and the bottom area. I wondered briefly how he’d reacted to that but decided it wasn’t really a thing I wanted to discuss with her. My ears pricked when she said they’d brushed his teeth. As well as everything else, they seemed to have done that very thoroughly because his breath is now as fresh a breeze. And believe me, this is a big change.

I can see how they make their money; I came away with a new, soft dog bed for Jerry. It’s just ‘pawfect’ for his favourite spot under the coffee table in the lounge.  They also gave me a loyalty card, which entitles me to 20% off after six visits. So I will definitely go back there. I might even take him for a quick shampoo in between strippings, just to keep him smelling nice and fresh. Oh dear, am I turning my deer-hunting country lad into a nancy city boy?

Fireworks Are Not For Dogs