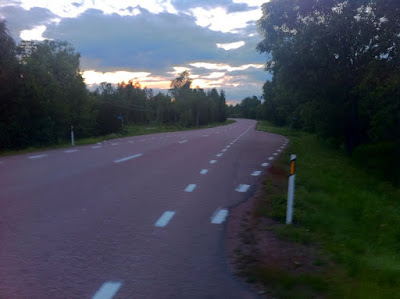 Last night I got a call from Son, ‘Have you got mummu’s (Granny in Finnish) telephone number?’

I was in London, he was in Sweden, with my mother – or so I thought.

‘Yes, but persumably you’re on the same ferry with her and can locate her without having to use your mobile?’ I asked, drily. My clever son is not known for caring much about life’s boring little practicalities. I knew he was travelling from Stockholm to Mariehamn with my mother. The cost of mobile telephone calls between Swedish and English phones are astronomical so we try to avoid calling each other when on holiday.

‘No, I’m on the side of the road and they’ve driven off!’ said Son.

I listened in stunned silence (Husband told me later my jaw literally dropped). My son, mother and step-father had been driving along the road from Stockholm to the port of Kapellskär when the engine made an unusual noise. They stopped at the side of the road. Son decided to get out of the car and investigate. When the door slammed shut my mother drove off.

‘Didn’t you try to wave?’ I managed to say. I know this is bad of me, but I was trying to stifle a giggle.

But Son was more than a little perturbed, ‘Of course I did – like mad! I’m on the side of the road somewhere in the middle of bloody Swedish countryside and they’ve driven off without me!’ he repeated.

He had a point; I could picture the deserted road, the dark woods all around him. (My novelist brain was in overdrive).

It had become serious. Thinking about it, the situation wasn’t funny anymore.

And my mother wasn’t answering her mobile. I later found out it was because she’d had it on silent after the funeral they’d attended that morning. (Another story) I quickly penned a text that I’m sure I’ll not see the like of in the history of texting: ‘Mum, look behind you, you grandson’s not in the car!’

On the sofa opposite me in London, the Englishman and Son’s Girlfriend (who happened to be with us) stared at each other, then both turned to look at me. ‘How do two adults manage to leave the third on the side of the road without meaning to?’ said The Englishman.

Girlfriend, who luckily for my son has a strong practical streak, said, ‘Do you think he has his wallet with him?’ Her thinking was that if my mother didn’t realise Son was missing, she could easily drive onto the ferry and sail off to Mariehamn without him.

I saw what she meant; they were late for the last Ålandsfärjan already. We’ve made the same ferry by the skin of our teeth many times; there’s not even been time to get out of the car before the bow doors have been shut. What if this happened now? At least if Son had money and credit cards he could walk to the nearest house, or village, and get help. But was Sweden as safe as it used to be? Would anyone let him in at seven in the evening? He was in the countryside and spoke no Swedish. An episode of Wallander began to play in front of my eyes.

Girlfriend and I stared at each other when there was another call, ‘They’ve just driven past me, not spotting me!’

Then my mother called, panicked, ‘This is terrible, I can’t believe it. We thought he just opened the car door to look at the wheels, and was back in the car, and the sun is so low, and I can’t see through my windscreen, and there’s something wrong with the wipers, and the water won’t come out, and I had my phone off because of the funeral, you know…’

My mother speaks little English and my son basic Finnish, which make communications a little difficult at times.

‘Calm down, mum,’ I had to hide my own growing panic, ‘Just turn around and try to find him again.’ Son on the other line said – rather quick thinking of him in the circumstances – that he could see a road sign for the next village. I repeated the name to my mother. ‘Ah, I know where he is,’ she said, a little more calmly.

A few minutes later I had a text from son saying he was back in the car.

‘Have a schnapps with your smörgåsbord on the ferry,’ I texted back.

‘Thanks, Mission Control,’ came the reply.