One of the reasons we decided to move from the country to the city was that I hated the times when Husband was away and I was left in the large house and grounds on my own. The feeling of being utterly cut off from the world just doesn’t suit me – I was born in a largish town in central Finland and spent my life in various cities until we moved to the English countryside. In the sticks I’d shiver on hearing the owl on a moonlit night. I’d rather listen to a car alarm go off in the night than the eery silence of nothingness. In the city I like the sounds of human life around me. The echoes of high-heeled shoes hurrying home on the street below while I’m reading in bed comfort me. The distant sounds of a police siren don’t frighten me; quite the opposite, they make me feel secure in the (possibly naive) belief that help is on its way to those in trouble.

All the same, I was not wholly looking forward to the first week on my own in London. I did what I used to do when faced with the same situation in the country: I filled my days and evenings with as much activity as possible; lunches with friends; nights out at the cinema and theatre; a visit by my mother (some of which I’ve written about below). On top of that I planned tasks for the few evenings I was going to be home alone; to write so many more words; finally organise the study; give my wardrobe a good sort out.
But it’s so much easier to increase the pace of your social life in London than it is in the country. As it turned out, the one night I stayed in was taken up by East Enders on iplayer. (I’ve become an addict). So, as you  may have guessed, I didn’t get around to the extra-curricular tasks: instead, even if I was out, I came home and took my laptop to bed, going to sleep far too late and waking up far too early. At the end of the week when Husband came home, I was exhausted, and all I wanted to do was to sleep.
I think I could call that a result and proof that the decision to move to London was the right one? 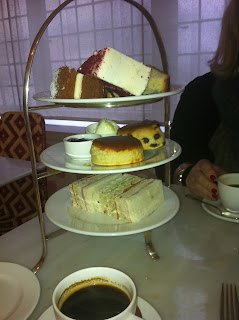 I’ll leave you with a picture of the Afternoon Tea (with coffee for us Finns, obviously) my mother and I had at Liberty’s. So superior – and less than half the price – to the one we had at The Ritz before Christmas.