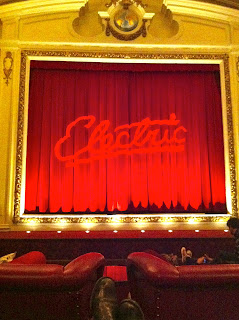 Once you’ve seen a film at the luxurious Electric Cinema in Notting Hill you just won’t want to go anywhere else. For me at least, it’s hard to beat the comfort of the plush armchairs, footstools holding blankets, excellent bar, even fresh doughnuts (although we’ve missed them every time because once they’re sold out they’re sold out).

It’s just unfortunate that The Electric is not exactly around the corner from us in Crouch End. Having to take the tube across London is very frustrating for the Englishman (who loves his cinema) when there’s a perfectly good Odeon (or the local a fleepit in my opinion) up the road in Muswell Hill. Sadly, I’m not one for compromises on the comfort score. 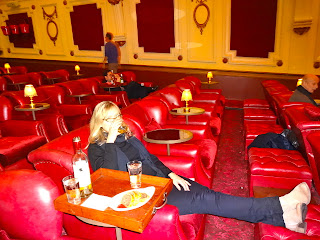 Apart from the location of the Electric vis-a-vis North London, the other problem is that the cinema gets very booked up. But the early bird gets the worm. I was wise enough to book tickets for Argo at the Electric a day before it won an Oscar. I wanted to see this film mainly because it’s set in 1979, exactly the same year my spy story (to be published at the same time as Coffee and Vodka), The Red King of Helsinki, is set. It’s always interesting and useful to see how the big boys treat a particular period.

As always, the Electric didn’t disappoint, but neither did Argo. For the duration of the film, I was on the edge of my seat. The subject matter, Hollywoodesque escape of five US Embassy staff from under the Iranian revolution, as well as the cast were pretty impressive. Ben Affleck as both the director and the lead, did very well too. The Standard in its review said that the clothing and other props did most of ‘the heavy lifting’ as far as the period was concerned, but having myself struggled with setting a piece of work in this period, I disagree. It’s important to get the physical period stuff right, but I think in Argo the script did its bit too. Amusingly for us now, most of the female Embassy staff were in their posts a) as subordinates to the male staff and b) in a relationship with their male superiors. This female subordination reflected the 1970’s. The language was also very true to the period; no-body worried about being politically correct.

The plot was exquisite, although both the Englishman and I had real problem following all the dialogue. Somehow, however, this increased the tension in the film. In the same way as the 5 fortunate (or unfortunate, take your pick) US Embassy employees stuck in Teheran and not inside the occupied Embassy, were having to learn their roles in a Hollywood movie, a cover which might earn them their freedom, so did the viewers have to struggle keep up with the action.

Ben Affleck was brilliant as the bearded FBI agent, and should in my opinion have won an Oscar for his performance. I am struggling to understand how he was ever described as ‘wooden’…

If you have a chance, go and see Argo. It’s a seriously good film.