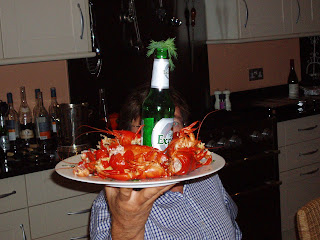 I must confess I have no idea where the tradition for crayfish in Sweden and later Finland comes from. (I hope I’ve got this the right way around, else I’ll have a lynching by Finnish friends, and possibly a deportation order, when I next step off the plane at Helsinki to look forward to.)

All I know is that when I was a little girl, come 1st of August my Father and his friends went off to the river with a strange net basket and bag clanking with bottles (I’d like to think it was beer but fear it may have been vodka) and tried to catch the little fighty devils. They were seldom very successful and we ended up with the bought variety. 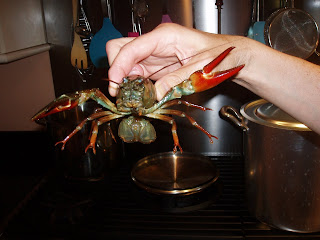 Bringing the angry, live crayfish home from market in a brown cardboard box was a frightening experience. As I held them I jumped every time I heard their claws striking the edge of the box, and each other, in a vain attempt to escape. Even then, I was a complete coward when it came to wildlife. I’ve tried to keep away from anything untamed and dangerous since (not counting men), but I do love a home cooked crayfish. 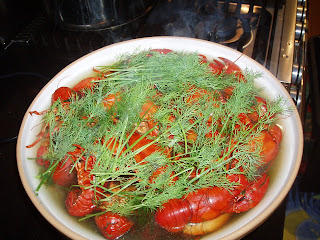 As well as eating the overnight marinated crayfish, the Finnish/Swedish tradition involves a quantity of dill, toasted bread and cheese. Oh yes, and a few glasses of vodka. And some drinking songs.

Even though in the UK we could get crayfish other times of the year, we like August, and so our annual crayfish party was held a couple of weeks ago. We get the crayfish from a wonderful man who fishes them in a clean, fast flowing stream, leaving the fish naturally washed and ready to cook. But first they have to be transported home, something I no longer get involved in, and leave it to the men of the house. Oddly this arrangement has worked for years now. 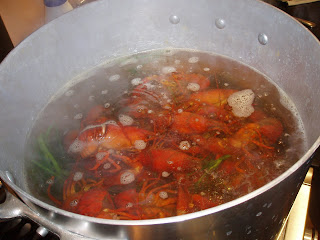 When they arrive, we try to cook them straight away. I supervise. I really do not like to get my fingers bitten. Do you see how very unsuited I am to this good life in the country? 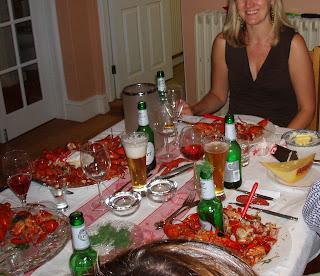 However eating them, while singing and drinking vodka, I excel in.