Last night, after the Six Nations Rugby, we couldn’t be bothered to cook and decided to sample the fish and chips we’d heard a lot about in Muswell Hill. Toffs, on The Broadway is supposed to serve North London’s best fish supper, so that’s where we headed. 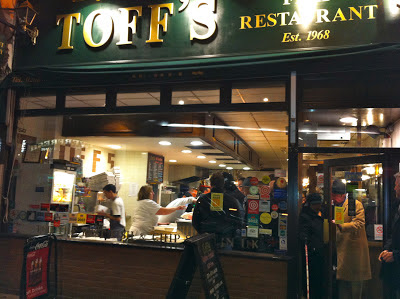 Doing our usual ‘fly-past’ check, the place looked just as a good chippy should. The fish at the counter was freshly cooked, and at just after six it was already filling up with both take-away business and those who wanted to eat in. 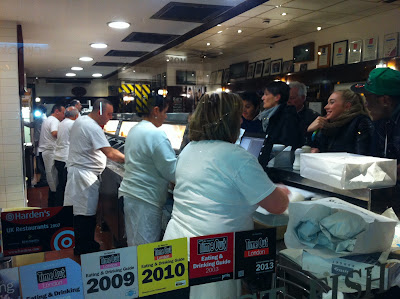 We booked a table for 7.30 and went in search of a pub called The Famous Royal Oak, which the Englishman had seen on Fancy a Pint was the only ‘decent pub’ in Muswell Hill. The pub is tucked away at the other side of the viaduct, in a very residential area, but once inside you realise this is a local spelled with a large L. You could see some of the punters had been there all afternoon watching the rugby, still there were a few families, all enjoying the friendly, convivial atmosphere of this ‘proper boozer’. I can see another visit will be imminent… 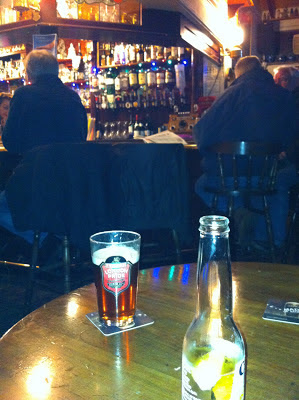 Back at Toffs just before 7.30 we had to fight to get inside. After a while we were shown to a table upstairs (the restaurant seems to go on and on, up into the attic of the house), and although I’d much rather have eaten in the bustling dining room downstairs, at this stage I was happy just to be seated.

The menu does have other things on it apart from the traditional fish and chips, but I wasn’t going to go away without sampling the real thing. The Englishman ordered cod and I opted for haddock. We also wanted some mushy peas, something which in my view you cannot eat fish and chips without. 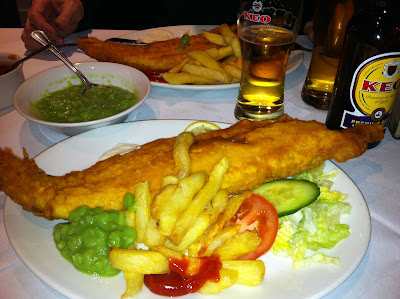 Whether it was the pint we’d had in the quirky old-fashioned Royal Oak, or whether it was the half an hour wait for our meal (the menu stated that all food is cooked to order and asks for your patience – fine by me), but when the food arrived and I took a first taste, I just couldn’t believe how good the fish was. The batter was thin and delicious, with a definite beer taste to it, and the fish was cooked to perfection. I normally eat but a fraction of the batter, but this time I could not get enough of it. The chips too were crisp and uneven, only the way chips cut from real potatoes are. The only thing missing was sliced white bread – but thank goodness they didn’t offer it. I was full to bursting afterwards and still couldn’t finish my dish. 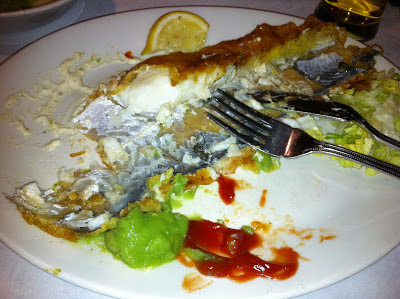 I really believe this was the best fish and chips I’ve ever had in England – and I’ve been both to Bryans in Headingley, West Yorkshire, and Harry Ramsdens (before they went all commercial and franchised).

The staff at this Muswell Hill institution were very friendly too – they were literally rushed off their feet, but all had a smile on their faces and couldn’t do enough for you.

We’re already planning our next visit to Toffs – that’s how good the meal was.

A wet Saturday in Hampstead