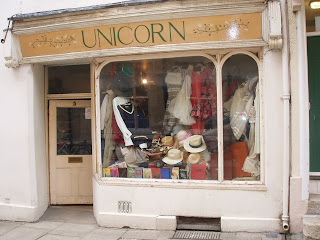 I’ve never been much of a vintage shop lover. I know it’s all the rage but I’ve never got past the door because of the smell. (I have a very sensitive nose)

But this shop changed my mind. I popped in for several reasons. It’s opposite son’s college and he said it was run by a ‘Mad French Woman’. I was immediately intrigued. ‘She’ll find something fantastic for you if she likes you. If not,’ here he made a throat chopping gesture, ‘you come out empty-handed.’ I like a challenge. Besides, daughter and I had a great need for something unique and fabulous. Peering at the crowded window I was impressed. The stuff did indeed look good. Son told us to bang on the door loudly, ‘She’s deaf too, I think.’ I knocked, to which he immediately remarked, ‘Louder, she won’t hear that.’

A slight woman with grey hair appeared from a door next to the shop and went past us. ‘Afternoon, ‘ she said before I even had time to ask. ‘I open after 12. Never in the morning.’ I gave her my sweetest smile and pointed at daughter, ‘We’re looking for a dress for a sixth form ball.’ Her small piercing eyes rested briefly on daughter before she nodded gravely and disappeared inside the shop.

She knew how to do inverted marketing – we were back knocking at her door five minutes past twelve. And felt honoured to be let in. No that there was much standing room. Clothes were piled high on the floor as far as the end of the small shop, leaving a tiny space in the middle. Even daughter was shocked by the chaos. And she actually sleeps in a room reminiscent of an overflowing clothes shop.

And true to form, the Mad Woman did find something fabulous for daughter. This lacy number fitted her perfectly.

We also came away with a French stripy jumper and a soft suede waist coat. Son even found a boater jacket which looked as if it had been tailored for him. Perfect for the punting on the river later the same day. 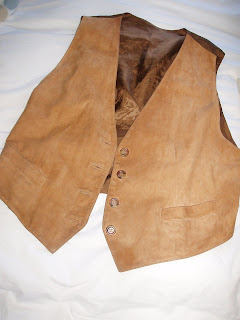 So from now on I’m a vintage fan. Just as well since both son and daughter seem to have developed a taste for expensive designer clothes. Hope they won’t inherit the hyper sensitive sense of smell too.