I’m delighted to take part in the Blog Tour for Meet Me in Cockleberry Bay by Nicola May. And on publication day to boot! This is the second book in The Cockleberry series. The first book, The Corner Shop in Cockleberry Bay made the best-sellers lists and I have no doubt that this sequel will be equally popular. 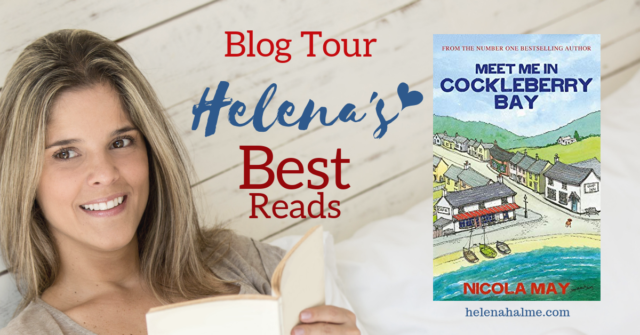 The cast of the runaway bestseller, The Corner Shop in Cockleberry Bay, are back – including Rosa, Josh, Mary, Jacob, Sheila, new mum Titch and, last but by no means least, Hot, the adorable dachshund.

Newly wed, and with her inherited corner shop successfully up and running, Rosa Smith seems to have all that anyone could wish for. But the course of true love never did run smooth and Rosa’s suspicions that her husband is having an affair have dire consequences.

Reaching rock bottom before she can climb back up to the top, fragile Rosa is forced to face her fears, addiction and jealousy head-on.

With a selection of meddling locals still at large, a mysterious fire and Titch’s frantic search for the real father of her sick baby, the second book in this enchanting series will take you on a further unpredictable journey of self-discovery.

Rosa, the heroine of the two books is now married to the lovely and handsome Josh. But their happiness is marred by too much time spent apart. Josh has his job in London while Rosa attends to her corner shop in a remote Devon village. This forced separation brings the worst out in Rosa. She soothes her insecurities and jealousy caused by her tragic childhood with heavy drinking. After a particularly devastating argument, Josh leaves her, promising only to return when Rosa likes herself a bit more.  So starts Rosa’s introspection.

Helped by her friends in Cockleberry Bay, all of whom are also battling their own demons, Rosa takes a good look at herself. But the book isn’t all about Rosa and Josh. There’s Rosa’s best friend Titch, a single mother, who doesn’t know who the baby’s father is. Add to this Rosa’s fortune-telling birth mother and her former lovers (there are two), plus various local characters with the backdrop of a seemingly sleepy English seaside village, and you have the ingredients for a good beach read. There are four-legged friends too in the form of Hot, the sausage dog, plus many other furry creatures who themselves have plotlines in this funny and sad story.

Although an easy and entertaining read, Meet Me in Cockleberry Bay deals with serious issues. In real life, more happens in the wake of the happy-ever-after, but it’s not a storyline often featured in fiction. Rosa’s excessive drinking is also an interesting theme. Nicola May handles this, as well as the realization of our heroine’s self-esteem issues very well. Mental wellbeing is such a taboo subject, it’s refreshing to see it appear in a romantic comedy. For me, the pace of this sequel was slightly slower than The Corner Shop in Cockleberry Bay. I think this is due to the requirement to tell the backstory. If, however, you haven’t recently read the first book, you’ll appreciate the little reminders of the previous plot lines.

Meet Me in Cockleberry Bay by Nicola May is a good beach read if you want a light-hearted story with a serious reality check. Just tap the image to get your copy now. (Or go here)

I received a free advance copy of Meet Me in Cockleberry Bay in exchange for an honest review.

Award-winning author Nicola May lives in Ascot in Berkshire with her rescue cat Stanley. Her hobbies include watching films that involve a lot of swooning, crabbing in South Devon, eating flapjacks and enjoying a flutter on the horses. Inspired by her favourite authors Milly Johnson and Carole Matthews, Nicola writes what she describes as chick lit with a kick.