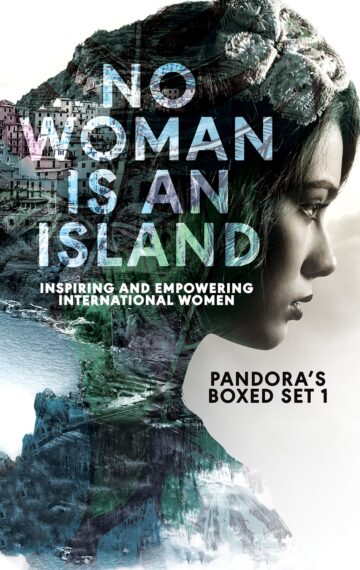 No Woman is an Island is a collection of novels by inspiring and empowering international women.

Pandora’s Boxed Set Book 1: No Woman is an Island

Novels Included in No Woman is an Island

Blood Rose Angel, by Liza Perrat
1348, France. A bone-sculpted angel and the woman who wears it––heretic, Devil’s servant, saint.
Despite her bastardy, Héloïse has earned respect in the French village of Lucie-sur-Vionne for her midwifery and healing skills. Then the Black Death sweeps into France.

Hidden by Linda Gillard
A birth. A death. Hidden for a hundred years.
1917.“Lady, fiancé killed, will gladly marry officer totally blinded or otherwise incapacitated by the war.” When Miranda Norton inherits Myddleton Mote and its art collection she is haunted by the dark secrets of a woman imprisoned in a reckless marriage.

The Chase by Lorna Fergusson
The past will hunt you down.
Gerald Feldwick tells his wife Netty that in France they can put the past behind them. Alone in an old house, deep in the woods of the Dordogne, Netty is not so sure.
Netty is right.

The Chalky Sea by Clare Flynn
July 1940. When bombs fall, the world changes for two troubled people.
Gwen knows her husband might die in the field but thought her sleepy English seaside town was safe. Amid horror and loss, she meets Jim Armstrong, a soldier far from the cosy life of his Ontario farm. Can war also bring salvation?

Coffee and Vodka by Helena Halme
Eeva doesn’t want to remember, but in Finland she must face her past.
‘In Stockholm, everything is bigger and better.’ Her Pappa’s hopes for a better life in another country adjust to the harsh reality but one night, Eeva’s world falls apart. Thirty years later, Eeva needs to know what happened.

“Powerful and Atmospheric …had me breathless. So original, quite unexpected.” – Being Anne Book blog

“Splendid, it has the power to catch the reader up in the rush.” – Scotsman

“Puts the reader in the saddle, in the castle, in the bedroom and on the battlefield. – Sandra S. Gallimore

You can get Book 1, No Woman is an Island, in Pandora’s Boxed Sets now! Book 2 Not Little Women is out October 2021.

Just go to Vine Leaves Press, or tap the buying links above.