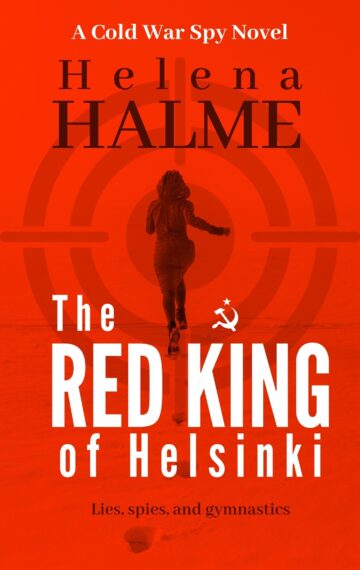 The Red King of Helsinki is an intriguing Cold War novel of espionage, murder and betrayal.

He’s a rookie spy chasing a violent Russian KGB man. She’s a feisty young student looking for a friend who has mysteriously disappeared. Can he save her?

It’s the height of the Cold War and Finland is the playground of the Russian KGB.

A former Royal Navy officer Iain is asked to work undercover. He’s to investigate Vladislav Kovtun, a violent KGB spy, dubbed The Red King of Helsinki by the Finnish secret service. This is Iain’s first assignment, and when he discovers the bodies left in Kovtun’s wake, he quickly gets embroiled in danger.

Young student Pia has two goals in life: she dreams of a career in gymnastics and she wants Heikki, a boy in her class with the dreamiest blue eyes, to notice her. But then her best friend, Anni, the daughter of an eminent Finnish Diplomat, goes missing. Soon Pia begins to investigate the mystery behind her disappearance.

Unbeknown to Pia, Kovtun, The Red King of Helsinki, is watching her every move, as is the British spy, Iain. Will Iain be able to save Pia before it’s too late?

The Red King of Helsinki is a Cold War spy story set in Finland during one freezing week in 1979.

If you like Nordic Noir, you will love this fast-moving spy novel by the Finnish author Helena Halme.

Pick up The Red King of Helsinki to discover a chilling spy thriller today!