I know this quiz has probably done the rounds a few times already, but I'd not seen it before, so I thought I'd share it with you for a bit of Thursday morning fun.I got Tove Jansson, the famous creator of the Moomintrolls; a perfect fit for me! Which famous person from Finland's history did you … END_OF_DOCUMENT_TOKEN_TO_BE_REPLACED

I wrote about this wonderful new animated Moomintrolls film (here), when it was featured in the London Film Festival last autumn. At that time the film only got two showings here in the UK, but now at last it'll be on general release from tomorrow onwards.So if you are a Moomin fan, or just fancy a … END_OF_DOCUMENT_TOKEN_TO_BE_REPLACED 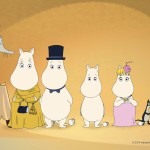 I was lucky enough to be invited to the press screening and interview sessions with the team of the new Moomins on the Riviera film yesterday. This is one of the bonuses of being Head of Finn-Guild, the Finnish-British society, and editor of our quarterly magazine. As a blogger, I have been invited … END_OF_DOCUMENT_TOKEN_TO_BE_REPLACED

Like most Finns, I'm a bit of a Muumin fanatic. It's no wonder, since I grew up with the characters and the TV cartoons. I also passed this love of the simultaneously wise and naive characters created by Tove Jansson onto my children.To celebrate Tove Janssons centenary, the Ateneum Art Museum in … END_OF_DOCUMENT_TOKEN_TO_BE_REPLACED