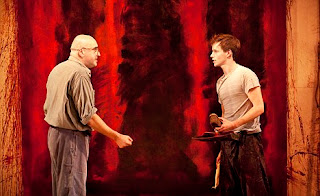 OK, the decision’s made: We’re moving to London.

Just joking.
We still have no idea where our next home is going to be. Last week it was Helsinki, the week before Stockholm, week before that Portsmouth (a curve ball?), then it was Bath and a week before that London. It seems we’ve now come a full circle. But I’m starting to feel sorry for my friends. I can see it in their eyes: They’ve lost all confidence that we’ll ever move away from the sticks.
But it’s so difficult to decide. And every time I go to any of the above places I feel I’d like to live there. Sometimes I think we should just throw all the names in a hat and get on with it.
So this week I’m full of praises for London. It’s not difficult to have a good time in London. Especially with the kind of friends I have. The weekend started off with a last minute decision to go up on Friday morning, rather than Saturday. Who needs to stay at home and pay bills and do tax returns when there’s a ride in a car up to town on offer? I hastily texted a friend who I don’t see often enough and by a miracle or miracles she was free. We had a fantastic lunch, trying to eat between catching up with each other’s lives. It’s amazing how much you can talk while eating when you want to.
We stayed in a new hotel, Grange St Paul’s, near the Cathedral, a beautiful part of the city, and quite a befitting location for a trip up in the Christmas season. The view from our sixth floor window was stunning. I’d stay there again had it not been for the huge queues to check in and check out again. Plus they charged £5 for two tiny bottles of water. I know you pay for your own stupidity (we don’t usually touch a hotel minibar just because it seems like a license to print money), but I’d come to believe that there’s a unspoken hotelier code, which says the first bottle of water is free. Especially in a heavily air-conditioned room. Obviously I’m wrong. I calculated that we paid about 1£ per mouthful of water. After a night out with Husband’s work colleagues, we certainly badly needed hydration, but it was only Evian. Oh well, lesson well learned. And I’m fairly confident the staff were aware of my unhappiness when I expressed it at reception. As were all the other people still queuing up to check out.
To calm down Husband and I had a long brunch. I drank wine as having water somehow didn’t seem fitting.
In the afternoon I was taken by another great friend to see ‘Artic Blue’ exhibition by a young Finnish painter, Alexander Gough. His winter scenes depicting what Finns call the Blue Hour, the time between sunset and darkness, were breathtaking. He’d captured the magical colours of Northern Finland perfectly. The black and blue light of the night reflected up to the trees by the snow, or the faint rainbow shades of the sunset, were so true to life I felt as if I was standing in a Lappish forest somewhere around the Artic Circle. There were also two lighter canvases of the bleak, flat light of the day, with snow heavy on the trees. I’d not heard of the artist or seen his work before, but I would really, truly recommend his beautiful paintings.
The culmination of the weekend was seeing Red at the Donmar. But I didn’t. See red, I mean. Because the play was fantastic. Written by John Logan, it describes the latest, troubled, years of Mark Rothko’s life, through discussions he has with a new young assistant, played excellently by Eddie Redmayne. Alfred Molina as confident, argumentative, egoistical Rothko is also superb.
The action, which takes place entirely in the artist’s studio, centres around a commission Rothko had for the Four Season’s Restaurant in New York. His unhappiness in the commercial nature of the work is fuelled by the naivety and purity of his young assistant. The critics have called the play, directed by Michael Grandage, as a ‘first-rate production of a second-rate play’ (Susannah Clapp in The Observer). I disagree. Even such good direction, set, lighting and acting cannot overcome poor words. Not in the small space that is the Donmar stage, not in a play with just two characters. If the play hadn’t been up to it, none of the rest would have mattered. But then perhaps that’s just me. I also saw heavy symbolism in the text: Rothko’s young assistant I was certain was his younger self. I felt the artist’s early life in violent Russia was heavily projected in the assistant’s tragic family history, as well as the final dismissal of the young, eager assistant by the older, wiser, disillusioned Rothko, ‘Make something new.’

Perhaps we’ll too take Rothko’s advice and think of a new place to move to?