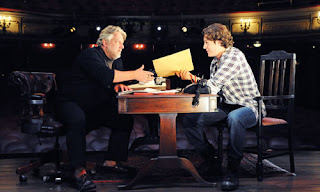 I have to admit that the only reason we booked to see Deathtrap by Ira Levin (who also wrote Rosemary’s Baby and The Stepford Wives) was purely because of Simon Russell Beale. After seeing him in London Assurance at the National last spring, we vowed to go and see him in any play he’d appear in the future. Because our normal theatre fare is Chekov, Strindberg or Ibsen, had I known it was billed as a ‘comedy thriller’ I’m sure I would have thought twice about going. (I know I am the worst kind of theatre snob.) Now I’m wishing I could write something like this…(I’m also a fickle character)

Last night was unusual for one or two other reasons too.

For the first time since moving to London six months ago, we were doing what we’d planned to do – go to the theatre during the week. The thought of being able to meet after work, rush into the theatre, have a nice meal and a drink afterwards, then take the tube home just seemed so, well, metropolitan, when we were planning our new life here in the city.

Secondly, and very unusually for us, we went out without drinking any alcohol. For some years now Husband and I have tried, sometimes successfully, sometimes less so, to be without booze in January. It makes the indulging during the rest of the year a little less guilt-ridden, and it sort of helps us to detox, save money and generally look after our bodies a bit more.

So there we were, at the lovely J Sheekey’s, eating before the play at a ridiculously early hour, dry as a bone, trying hard to be unaffected by other pre-theatre diners at neighbouring tables enjoying all manner of champagne cocktails, wines and after dinner drinks. Our table just had four glasses of sparkling water (we splashed out…’splashed out’, geddit???). The wine waiter hovered around us for a while but soon gave up when one of us chucked the wine list in his arms and said, ‘We’re fine, thank you.’ It occurred to me that when we were living in the country we could just hide our abstinence. It was much easier to do it there. We didn’t need to have the email exchanges beforehand from our friends making sure we we all on the same page (which they very happily were, and even suggested the no-alcohol policy first…). In the country we just didn’t go out to pubs, restaurants or the theatre.

But back to the play. In a word it was glorious. The set, which remained more or less unchanged all through the performance was perfect – the antique weaponry so crucial to the plot were displayed against the dark wood beams of the walls of the high-ceilinged room, which in turn rendered the set a dramatically sinister air. So over the top, and so in keeping with the plot. The sense of the house being isolated – again so very necessary for the plot – was also reflected brilliantly in both the set design and in the 1970’s costumes.

Simon Russell Beale, who played Sidney Bruhl, the ageing playwright, has one of the most comic faces in the London theatre scene at the moment. ‘Just one small movement of his eyebrow can raise a thousand laughs,’ my friend observed. (Can you tell we weren’t drinking?) But no comedy is complete with a sense of dark seriousness, one of the most important ingredients for making the audience suspend disbelief. And boy did we do that.

I don’t think I have been so shocked by a twist of a theatre plot, nor have I shrieked in real terror as much since Richard Coyle pretended to strangle a fake budgie in front of my eyes at the Donmar while playing the chauffeur, John, in After Miss Julie, a Strindberg play adopted by Patrick Marber. During that performance six years ago, to my great embarrassment, I actually screamed out loud. Because, even though I knew the bird wasn’t real, and knew the character would not be killing anything, the actor made me believe that had the bird been alive, the character in the play would have broken the poor defenceless creature’s neck. This was enough to cause me to suspend all my disbelief and believe what was being acted was actually happening.

Funnily enough, Husband bumped into the same actor a few weeks later and told him that it was his wife who’d screamed during one of the performances (we had front row seats). He said he remembered, and I know he was probably just being kind and agreeable so as not to cause offence. But on the night I felt sure I saw a twinkle in his eye when he looked at me while taking the applause. Or perhaps I was suspending disbelief again?

Anyway, back to Deathtrap. Apart from Simon Russell Beale, Claire Skinner (of BBC’s ‘Outnumbered’ fame), was also incredible as Myra, the playwright’s American wife. Her accent was so understated, so perfect to at least my foreign ear, that I had at times difficulty in remembering she was the same woman who’d played the harassed (English) mother of three so brilliantly on TV. Jonathan Groff as the young playwright also did a grand job as did Jane Lambert as Helga ten Dorp, the batty clairvoyant, and Terry Beaver as the ‘sharp, but dull’ attorney.

In spite of its obvious in-jokes, and its self-deprecating humour about writing and fame, (both of which can be very tedious to the ordinary theatre-goer), the play in its essence is a sharp-witted comic tragedy. I do not wish to give the plot away, but I urge you to go and see it, if you possibly can. There are several online theatre ticket companies who still have seats for the remainder of the run.

Will my Strindberg obsession produce a novel?