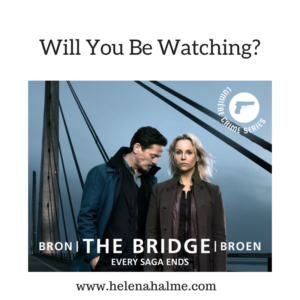 It seems that I’ve been looking forward to watching the last series of The Bridge for ages now. The Englishman and I saw the first episode of this dark Nordic Noir TV series with the troubled female detective, Saga Noren, when it was aired in Sweden on New Year’s Day. I’ve since been trying hard to avoid any spoilers online from my friends who’ve seen the whole of the series already. Because I can remember every detail of what happened, and of course, there was a cliff-hanger, which I’ve had to live with for over four months!

The Bridge Is A Worldwide Hit

The Bridge has followed in the footsteps of Stieg Larsson’s Millenium series, Wallander and The Killing, all of which have had millions of viewers worldwide. The Bridge, like The Killing and Wallander, has been sold to hundreds of countries and has also had its international remakes (The Tunnel in the UK).

In The Bridge the star of the show is Saga Noren, a talented Swedish detective who is socially awkward, to say the least. She has Asperger’s syndrome and consequently doesn’t act in a ‘normal’ way. She’s the kind of character who talks about sex as if it’s the same as eating a sandwich, or treats people she has to interview as if they were specimens of humanity, rather than victims of crime, or grieving relatives. Her Danish male counterpart is almost equally troubled, something which makes the dynamic between the two characters co-operating across country borders even more interesting.

The fact that a Nordic Noir TV series is a worldwide hit is nothing new, of course. For some reason, which no-one can really explain, international audiences cannot get enough of these bleak, violent stories of crime and death.

What Makes Nordic Noir So Popular?

It’s wholly natural that I should be more than slightly obsessed with Nordic Noir, but why is the genre such a worldwide hit? Many people have written about why Nordic Noir remains one of the most popular genres on TV and books, but no-one seems to be able to pinpoint why.

I remember reading an article in The Times years ago when Stieg Larsson’s books were taking the world by storm. The analysis was simply put, ‘Blood looks brighter on snow.’ This headline has since been used many times to describe the popularity of the genre. It has even had its fair share of book titles. (See Blood on Snow by Jo Nesbo).

It’s true that the settings of these crime thrillers play an important part in the stories. It’s often dark, the ground is covered in inhospitable snow and ice, or it’s rainy and miserable. (Have you ever seen a Nordic Noir drama set on a summer’s day by a lake?). In The Bridge, the Öresundsbron is integral to the plot, as it connects Sweden with Denmark and is usually the location of the initial murder.

Many people define Nordic Noir as a genre where the setting is effectively another character. It may be true, but I think this analysis is too simplistic.

It’s not all about the setting. Stieg Larsson’s books were so popular because readers were not used to seeing the seedy and violent underbelly of a seemingly clean, rich welfare society like Sweden. Nordic countries regularly top happiness charts, their educational systems produce healthy, well-balanced individuals. The view elsewhere is that in Scandinavia there are no poor, homeless or socially disadvantaged people. It’s a fair, equal society that everyone else should aspire to.

When stories emerge showing that there’s filth and grime underneath all that ABBA happiness, IKEA efficiency and hygge cosiness, the rest of the world sits up and takes notice.

Whatsmore,  the books and the TV series include complex characters, who invite empathy without following the rules or even being likeable. Think of the dropout genius Lisbeth Salander, the abrasive Sarah Lund or the socially inept Saga Noren. Plus all these brilliant, feisty characters are women.

Like any popular genre, Nordic Noir has had its failures. The TV series that have followed The Killing are not all as brilliant. To be honest, I didn’t really get on with the follow-up to the first series of The Killing either. There were too many scenes with the famous jumper, flashlight and a dark cellar with a victim tied to a chair over plastic sheeting. But other better Nordic Noir dramas have followed, such as The Bridge, which is in its 4th (and final) season, and no doubt there will be another huge hit coming in its wake. How long can this continue?

If I had a penny each time professionals in the publishing and film industries tell me that Nordic Noir is over, I’d be a rich woman. But in spite of all talk of the genre being past its sell-by date, another new series, be it in books, or in TV emerges.

I personally think it’s wonderful that stories from my home are constantly on TV and popular in books. I may sometimes get a little frustrated when people think Noir is the only genre in Scandinavia, but since I am a large consumer of the genre, I cannot be too upset about it.

So, I for one will be watching The Bridge at the edge of my seat when it airs this weekend on BBC 2.

Will you be joining me?

‘The Bridge’ starts on BBC2 on Friday 11 May at 9pm, all previous series are available on iPlayer now. 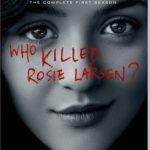 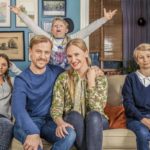