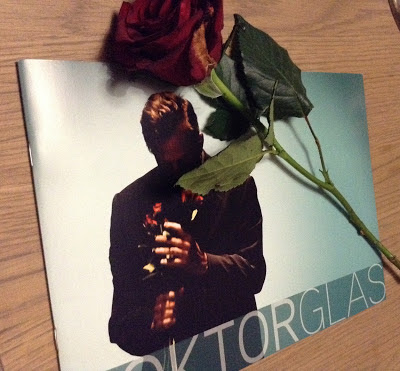 I’d been looking forward to seeing this dark Swedish play by Hjalmar Söderberg since I interviewed Krister Henriksson in London last autumn. Henriksson, who is better known to UK audiences for starring in the Swedish detective series as the morose Wallander, has been playing Dr Glas to great acclaim and full houses all over the Nordic countries. This is the first time Dr Glas has been performed in London, what’s more, probably the first time any play has been staged in the West End in Swedish with English surtitles.

In whichever language, Dr Glas will attract Nordic Noir lovers. The play, written in 1905, deals with issues such as sex, adultery, murder and abortion. It’s a one man show with no interval and very little in the way of props. The only noticeable difference in the set occurs, as moving from one act to another, the background colour changes from green, red to blue. All very minimalistic and very Nordic.

The villain in the story, Pastor Gregorius, is loathsome and morally repulsive. He has a beautiful wife, who in despair seeks the help of the lonely, but passionate physician, Dr Glas. The story is told in the form of a journal, which Dr Glas himself recounts. Immediately, however, the audience is aware that he may be an unreliable narrator; he says he won’t tells us everything, but the bits he’ll tell us are true.

In narrating the story, Krister Henriksson excels. He becomes the characters he, as Dr Glas, describes. Expertly, he contrasts the disgusting figure of the hypocritical clergyman with the beautiful, fragile Mrs Gregorius. Even a minor character such as the Doctor’s journalist friend, is skilfully portrayed by Henriksson. It’s as if the other characters were on stage with Henriksson.

As for Dr Glas himself, Henriksson becomes the sad, obsessed man, destined to seek unrequited love. The doctor’s terrible moral dilemma, the deep love he feels for Mrs Gregorius and his desire to be a hero, seep out of Henriksson’s every pore.

I am, however, in two minds about the surtitles. In operas they work well, because they are just a guide to what’s being sung, rather than a simultaneous translation of the actors words. On one hand it’s fantastic that a UK audience can enjoy the talent of a Swedish actor such as Henriksson live on a stage, but, for me, as a Swedish speaker, the surtitles were a pain. They either lagged behind a little or were slightly ahead of the spoken word. This is natural; it’s impossible to match a translation word for word in two languages (I should know). But the time lag meant that the audience reaction to any dramatic line was out of sync with Henriksson’s words, and with my own reactions. So rather than aiding my pleasure of the play, they disrupted the suspense of my disbelief. It’d be interesting to find out how an English speaker found the experience of the surtitles. Did they detract from the dramatic action on stage, I wonder?

Having said all that, if you love Nordic Noir, I would very much recommend you see this rare treat of a truly authentic Swedish play in London. You may even be as lucky as I, and a few others in the audience, and catch one of the  red roses Henriksson threw out at curtain call.

Henriksson is a charming gentleman to the end.

Dr Glas
Wyndham’s Theatre
London
www.drglas.com
Tickets are from £37
Until 11 May 2013

Comedy Downstairs at the King’s Head