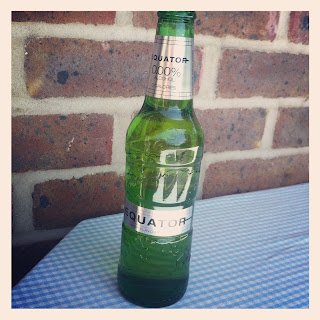 In my quest of finding a non-alcoholic alternative to wine I was sent 4 bottles of new beer flavoured drink called Equator. It comes in a bottle which looks very much like a certain brand of alcoholic lager, and get this – as well as having no alcohol it has just under 3 calories per bottle, ie. next to nothing!

Now readers, I do love wine, and beer, but sometimes, just sometimes, it’d be nice if you could go to a pub or a party and not have an alcoholic drink. Because in my ‘old age’ I’ve found that drinking alcohol not only adds on the pounds, it also makes my brain go all mushy. And when you are trying to forge a career as a writer, (as well as working as an accountant) you just can’t afford a half functioning brain every day of the week…(there goes my claim to a Finnish passport).

Anyway, when I saw Equator contains 0% alcohol and 0% calories (less than 3 kcl is considered negligible by food scientists), I thought yeah, and it’ll taste like cat’s whatsit. Then I thought, actually, so does most brands of the lager that I often drink in pubs to try to cut down on my calorie and alcohol intake. But, to my great surprise, Equator tastes quite nice. There’s a hint of the barley malt extract which it contains, and when we sampled it together with Son and the Englishman, we found that with the addition of a slice of lime, it could quite easily pass as ‘normal’ bottled lager. We all loved it, as the three empties show. 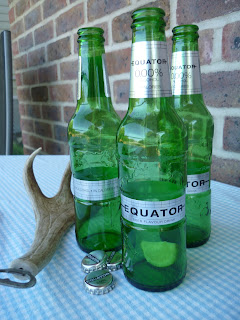 Plus, we all agreed, it’s the appearance of Equator which is its trump card. In any pub or a friend’s BBQ party, holding a bottle of Equator, you’ll look as if you’re drinking any old lager. As silly as it seems, not having alcohol at parties or in pubs still carries a stigma of sorts. It’s stupid, I know, but I guess we all just want to feel as if we belong and don’t stand out.

Plus, so many of the non-alcoholic alternatives are sugary, and when it comes down to it, if there’s a choice of drinks with equal amount of calories, one being alcoholic, one not, I would plump for the alcohol every time. But not any more!

I was sent Equator to try, but as always I would not recommend the product unless I really liked it.

Equator
Beer Flavour Drink
A pack of four bottles sets you back £2.99, and it’s only available in selected Tesco stores.