It’s interesting to see that the peace protests are going ahead outside the Faslane Naval Base again. According to Helensburgh Advertiser, the local Scottish newspaper, talks are being held in advance of a temporary protest camp near Coulport where the warheads for the Trident nuclear submarines are being stored. The protest will take place in July 8-14th and I am very tempted to go along! 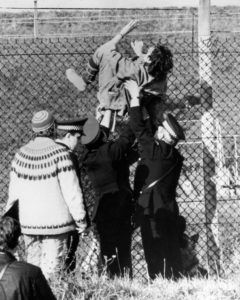 Kaisa, the hero of The Nordic Heart -series of books lived in Helensburgh in the 1980s a few years after my husband-to-be, (my Englishman) was also based at Faslane (although he didn’t serve on the nuclear deterrent subs). At the time, there was a large permanent peace camp on the road between Helensburgh and the base. It had been set up in 1982 beside the A814, and later the local council rented the site to the Peace Camp for a peppercorn rate of £1. They held regular protests against the Polaris submarines (predecessors to Trident), stopping the cars going between the base and the town. Sometimes they would rattle the fence of the base in the early hours of the morning, wanting to disrupt the lives of the naval personnel living in the housing blocks on the base, or spray paint the signs outside the base. 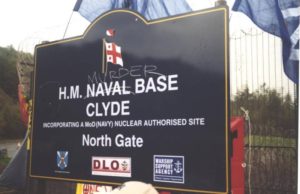 When I was researching the camp and the protests for The Faithful Heart, I came across these pictures. The top one shows the local police pulling a protestor off the fence, the second a sign on one of the gates, which had been turned into H.M. MURDER BASE. These two incidents were too good not to use as a piece of real life in my books. 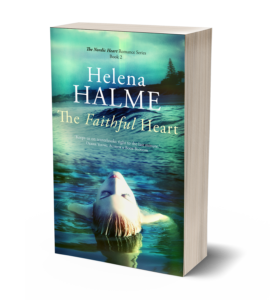 I’d always been very interested in Nuclear Disarmament, and after I moved to Britain, I followed the news about the camps at Greenham Common and the one in Faslane closely. Watching the news on TV, I often wondered how the police felt when they were pulling women off fences in Greenham, or dragged protestors off the road in Faslane. The conflict between the peace protestors and the people who worked for the Navy, or were married into the services, was also incredibly fascinating for me, so I decided to set the second book in The Nordic Heart series up in Faslane to explore this conflict.

In the second book in The Nordic Heart series, Kaisa battles with her conscience: she agrees with the protesters but also loves her husband, Peter. She cannot share her thoughts with anyone because she’s married to a Royal Navy Officer serving on a Polaris submarine, and all the other wives around her view the peace protestors at the roadside camp with disgust and suspicion. Kaisa ends up befriending one of the protestors, something which she has to keep as a secret from her husband and the rest of the naval community.

The friendship with a member of the CND (Campaign for Nuclear Disarmament) and Kaisa’s political views are just a few of the problems she faces as a newly married Navy Wife. I loved writing about this pesky, but hopelessly naive and very lonely young woman as she struggles to come to terms with her new life in Britain. I have to admit that I too when I first moved to the UK, faced similar problems. Some of what I felt then is described in the books. Luckily, my Englishman didn’t serve on what the Navy called the ‘Bombers’ in Faslane, so we were never based up there together. I’m quite sure that if he had been on the Polaris nuclear submarines, we would’ve had very similar troubles brewing in our marriage, as Kaisa and Peter had in their tumultuous relationship.

You can find out more about The Faithful Heart here.

To find out about all the books in the series, go here