I started preparing for our Christmas Eve feast a few weeks ago, but the cooking proper began today. A day late due to some emergency pampering required for the cook who has been suffering from a series of ailments, but I shan’t bore you with that anymore…(you can read about my autumn of unwellness here and  here).

Anyway, the first thing I did today was to prepare the Gravad Lax for the Finnish Christmas. And since there have been so many variations on this dish, I shall recount mine, one which I, as a purist in a family of purists, prepare in the old-fashioned way. My Father used to make this dish all through the year – we’d go and buy the salmon from Helsinki market and he’d talk me through the process while preparing the fish.

I use a middle section of salmon, filleted by the fishmonger. Mine was done by the helpful staff at a local Waitrose. Luckily, as is often the case this time of year, whole salmon was on offer. I asked the fishmonger to make steaks out of the rest of the fish which I put in the freezer. I declined having the head, even though I know Son will think me crazy…I should now be letting a fish stock slowly simmer on the stove in the background. But in a small kitchen with just the one fridge freezer I have no room for extras this year.

The first task in this simple recipe is the nastiest: you have to – really you do – remove all the bones from the fillets. The best tool is a set of fish tweezers which make it somewhat easy. Plus a pair of disposable gloves. (I had a manicure yesterday after all!) Salmon fish bones are really large; you can imagine how they would totally mess up the slicing of the Gravad Lax later.  Feeling along the fillet with a finger, make sure you get rid of every one. 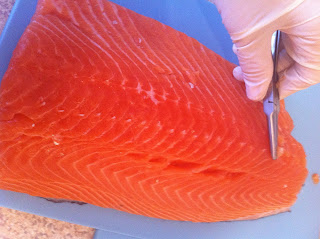 When both sides are clean of bones you can mix the salt, sugar and white pepper and spoon liberal amounts of it on the flesh side of both fillets. Do be liberal, it needs all of it to make it into delicious cured fish. 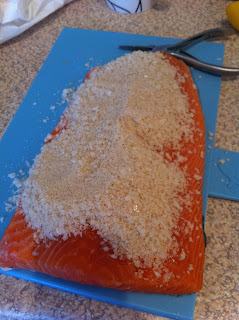 Next chop two packets of dill (or as much as you have) over the top of the sugar salt mixture. 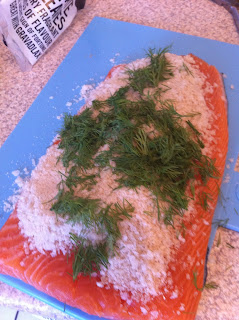 Now comes the difficult bit; you need to join the two pieces together so they fit snugly, thin edge against thick one, cut side against cut side. All this without losing all the sugar salt and dill. You should end up with a parcel which you can then wrap in cling film and put on a plate, or a plastic container. But remember there will be liquid, so the plate needs to accommodate that. I use a container but you need to make sure the fish doesn’t get too wet. 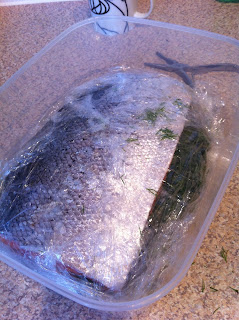 Place the parcel in the fridge and – this is where I take issue with messieurs Jamie O and Nigella L – do not cover it with anything, particularly not anything heavy. (And on no account should any olive oil pass anywhere near Gravad Lax – I mean!) If you do put tins of this and that on top of the fish, you’ll end up with a very dry Gravad Lax. Instead you should turn it over once per day, pouring out any liquid that comes over the top of the parcel. (A little should be left behind but the fish should not be lying in liquid.) You can leave the salmon in the cure for up to 4 days, but only two will suffice for it to be really tasty.

When you want to serve the fish, brush away most of the dill and replace with chopped up fresh herbf.  I serve my with dill sauce, which I usually make myself, but this year it’s Waitrose shop bought, I’m afraid. But don’t tell the troops; I’ll be getting complaints on Christmas Eve!