I rashly promised someone over on Facebook that I’d blog the recipes for my Finnish Christmas vegetable bakes… sadly I never got round to it this year, but perhaps in 2015? I see from my archives that I have blogged several times about my Finnish food traditions (with pictures), so until next year, this will have to do.

As usual, Christmas was a busy time for the Halme family. On the 24th, together with Son and Daughter, we had our fill of gravad lax, marinated herring, schnapps, as well as home-cooked ham and Finnish swede and carrot bakes.

On Christmas Day, after presents and a couple of glasses of bubbly, we all headed out to the country to visit the Englishman’s mother who turned 94 on the day. It was a lovely family gathering with 12 of us around a long table, chatting and laughing – and eating too much.

On Boxing Day we drove back again through the frosty landscape in the bright sunshine, which in the evening turned into driving rain (sadly no snow in North London), but by that stage we were safely tucked up in our flat, preparing another Finnish food-fest. For some reason, all of it tasted far better second time around – perhaps it’s the contrast between the traditional turkey and trimmings which makes Finnish food taste so delicious.

Day after Boxing Day was Daughter’s birthday, and we were drinking champagne again in the morning, and in the evening we had invited a few of her friends and Son to a local eatery here in North London, Heirloom. It’s a bit of a tradition to go out on Daughter’s birthday, either for brunch, lunch or dinner. Usually I keep the venue a closely guarded secret, but this year, I gave her the choice of restaurant and she liked the idea of keeping it local.

We’d been to Heirloom a few times now, and we’ve never been disappointed with the food. It’s fresh, traditional British fare with a modern vibe – all the vegetables are grown on a farm in Buckinghamshire and the food therefore is truly seasonal. I had Cornish Squid with Fennel and Datterino Tomatoes to start, Cornish Place with Ratte Potatoes and Seaweed Butter for mains. Both dishes were cooked to perfection. Other people around the table seemed pleased with their choices too. I tasted Daughter’s Yellow Chanterelle Barley Risotto with black pudding to die for. It was all so tasty that the place reminded me a little of Fäviken in Sweden. Heirloom is obviously not in the same league vis-a-vis the theatre of the experience there, or the ingredients (or price bracket), but the cooking is definitely superb, and really quite handy for us, as it is just a short walking distance from home.

Yesterday I was invited by friends to lunch to Kaspar’s at The Savoy (as one does!), and again my tastebuds were taken to another level. The Savoy looks so festive, especially at Christmas time, and inside its luxurious cocoon, you feel as if you’d stepped into another, more elegant, era. 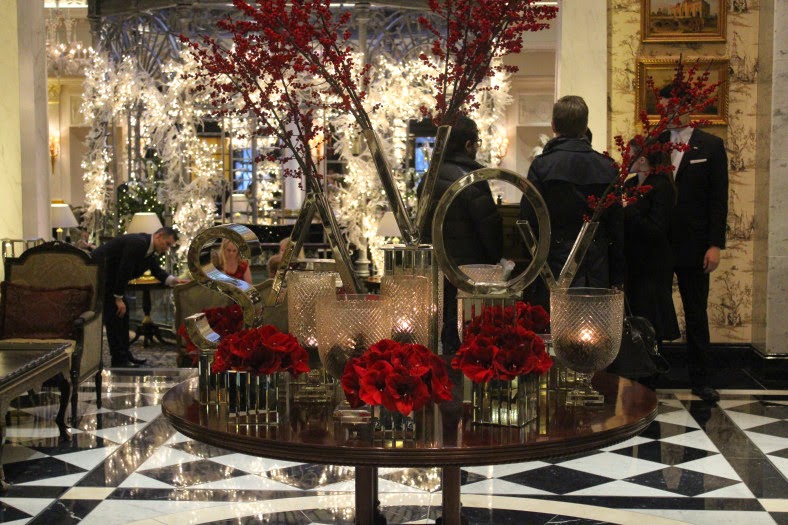 Today, I came down to earth with a bump as the alarm went off at 6.30 am and I had to make my way to work. Luckily the Englishman drove me into Camden, so at least I didn’t have to brave the London public transport quite yet….

Although, there is still one huge treat in store for me this Christmas: we are going to the Finnish pop-up restaurant, Tenu, tonight. But more about that later!

Did you have a quiet or a busy Christmas?

The Next Big Thing?