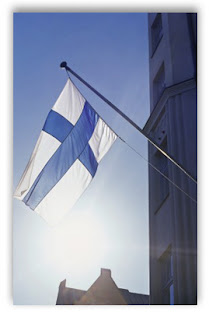 I had a wonderful time in Helsinki last weekend. (You may have noticed…?)
Although my family now live elsewhere, this city was home to me during my teenage years. I also went to university here, so this is a very special place for me.
The main purpose of this trip was to see Daughter who’s working there as au pair for a lovely Finnish family. But it was also a great excuse, and a fairly rare one, to get my Helsinki-fix.
On the Friday night we went off to find a place to eat. I hadn’t booked anywhere, which is very uncharacteristic of me. I thought the whole world was suffering from a recession, so a table for two in a restaurant somewhere in the centre of Helsinki would not be a problem. I hadn’t factored in the Pikkujoulujuhla- season.
In Finland everyone has Christmas parties around the first two weeks of December. Just like here, I hear you shout. Yes, but in Finland I mean everybody. One person may have four or five different groups to celebrate with: colleagues, clients, head office staff, local office staff , a group of friends. You name it, we Finns can make up a group to have a Pikkujoulujuhla with. They go out to eat in a restaurant and then to a bar, then a club for something called Jatkoille. You see we Finns are efficient in everything we do. Whether it’s partying or cleanliness. Or mobile telecommunications, traffic, warfare, skiing (enough efficiencies, Ed.).
I’d completely forgotten the tradition. So off we traipsed and after three restaurants turned us away, we finally got the last table at Sasso, an Italian place. I’d been there twice before and thought they’d be the last restaurant to accommodate us, but I’m glad I persevered. Frequent visitors to this blog know that I love all things Italian almost as much as all things Finnish. So I was in heaven. And they were having a Truffle Week.
Now I must say this was not always the way things were in Helsinki. And also not the way I felt about the city. When I lived here some 25 years ago, the city was a different place. And I was a different person. Younger, obviously, but also so much more blinded by things that were foreign. Things glittery and superficial. Things happy and glad.
You may think I still am, and certainly I like beautiful things. But I also appreciate the simplicity and serenity of what is my home city (and country). A good example of this was the Independence Day celebrations.
There was so little fuss.
In the week running up to Sunday 6th December the papers ran a few stories and diaries from the wars with Russia. During the 2nd World War Finland suffered from its own special kind of nightmare: being threatened with invasion by the mighty Soviet Union. In the end they did chop off a bit of Eastern Finland, something those who lost their loved ones and/or their homes will never forget. But we remained independent.
In spite of the great pride we all Finns take in this fact, to celebrate the 92nd year of independence there were no street vendors selling Finnish flags, t-shirts or other patriotic trinkets. There were no banners flying, just a few special displays in shop windows. Perhaps a simple white tablecloth with two blue and white candles on it. And of course there were flags flying from masts. And all the shops and some restaurants were closed for the day.
Then in each city there is a special celebration, in Tampere they have a fireworks display, in Riihimäki (a military town) soldiers march. In Helsinki there was a small torch-lit procession of representatives from all the universities in the city. They walked from the Hietaniemi cemetery, the North of the city, to the steps of the Helsinki Lutheran Cathedral. Not many people had turned up, but then in a country of 5 million residents 10 people make a crowd. The Mayor and a few students’ union leaders spoke. The students choir sang Finlandia.
Not wishing to embarrass Daughter, who was standing next to me as we braved the cold under the pitch black Helsinki skies, I held back the tears. And as I thought about what Finnish Independence meant to me, I realised how I have let this, the country of my forefathers, down.
Not only did I move away, I emigrated with a degree. An education which was heavily subsidised by the Finnish state. Just imagine what good I would have done in my small nation with my skilfully trained brain (Hmm, perhaps this is a little exaggerated). On top of that I had two children who’ll most likely settle in a foreign country. For a small nation where population growth is minimal this is an important consideration. Then I convinced my wonderful son that there was absolutely no point in him doing his duty of conscription in the Finnish army. And organised a pardon for him on the basis that he had absolutely nothing to do with Finland. And never will.
How did I become such a bad citizen?
As we watched the TV broadcast from the annual ball from what we Finns call the Presidential Palace, and Daughter calls a rather nice town house ( see what I’ve done!), I did wish with all my heart I’d stayed in Finland. But then, I wouldn’t have what I have now. And this, my Good Life in England, I wouldn’t change for anything. Not even a place in the queue to greet the Finnish President in her rather nice town house.