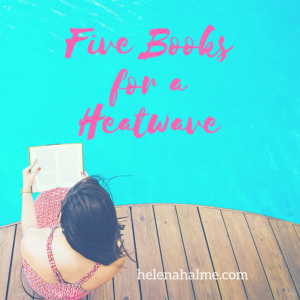 A heatwave can be a terrible experience as we’ve recently witnessed with the tragic loss of life in Japan and in Greece where wildfires have raged killing at least 80 people. Heatwaves also make people a little mad, something which provides perfect fodder for authors wishing to create a spectacular backdrop to a love story, family drama or a tale of crime and passion.

Here are five books where the heatwave is one of the characters in the story.

Instructions for a Heatwave by Maggie O’Farrell

The start of this novel is so evocative of the time and place, that I was gripped from the very start. Here’s the blurb:

It’s July 1976. In London, it hasn’t rained for months, gardens are filled with aphids, water comes from a standpipe, and Robert Riordan tells his wife Gretta that he’s going around the corner to buy a newspaper. He doesn’t come back. The search for Robert brings Gretta’s children – two estranged sisters and a brother on the brink of divorce – back home, each with different ideas as to where their father might have gone. None of them suspects that their mother might have an explanation that even now she cannot share.

Warning: if you start this book, you will be up all night to finish it.

Cat on a Hot Tin Roof by Tennessee Williams

Weirdly, I’ve never read this book, something which I will definitely need to rectify. I have, however, seen the famous film with Elizabeth Taylor and Paul Newman in the lead, and loved the palpable sexual tension between the characters, intensified by the sultry heat of the American Deep South. Here’s the blurb:

‘Big Daddy’ Pollitt, the richest cotton planter in the Mississippi Delta, is about to celebrate his sixty-fifth birthday. His two sons have returned home for the occasion: Gooper, his wife and children, Brick, an ageing football hero who has turned to drink, and his feisty wife Maggie. As the hot summer evening unfolds, the veneer of happy family life and Southern gentility gradually slips away as unpleasant truths emerge and greed, lies, jealousy and suppressed sexuality threaten to reach boiling point. Made into a film starring Elizabeth Taylor and Paul Newman, Cat on a Hot Tin Roof is a masterly portrayal of family tensions and individuals trapped in prisons of their own making.

I discovered Penelope Lively when I was commuting between Portsmouth and my BBC job in Caversham in the late 1980s, and have since bought and read all of her books. This novel I remember being very atmospheric but quite sad. Here’s the blurb:

Pauline is spending the summer at World’s End, a cottage somewhere in the middle of England. This year the adjoining cottage is occupied by her daughter Teresa and baby grandson Luke; and, of course, Maurice, the man Teresa married. As the hot months unfold, Maurice grows ever more involved in the book he is writing – and with his female copy editor – and Pauline can only watch in dismay and anger as her daughter repeats her own mistakes in love. The heat and tension will lead to a violent, startling climax.

In Heat Wave, Penelope Lively gives us a moving portrayal of a fragile family damaged and defined by adultery, and the lengths to which a mother will go to protect the ones she loves.

Carol Cooper is an author friend of mine. She’s a GP who writes sexy romances set in London. The plot of Hampstead Fever takes place during a heatwave in the city where 30-somethings try to find love  – or keep it alive – while passions arise in the sweltering temperatures. Here’s the blurb:

It’s a sizzling hot summer and trouble is brewing. The lives of six Londoners overlap and entangle as each of them searches for love, sex, money, or just a truce between squabbling children.
Like “Love, Actually,” but set in Hampstead in midsummer, this is a slice of contemporary urban life to make you laugh, cry, and nod in recognition.

The Stars Are on Fire by Anita Shreve

I absolutely adored this novel by the hugely successful US author Anita Shreve, which is set during a continued heatwave and drought in post-war Maine. Here’s the blurb:

Hot breath on Grace’s face. Claire is screaming, and Grace is on her feet. As she lifts her daughter, a wall of fire fills the window. Perhaps a quarter of a mile back, if even that. Where’s Gene? Didn’t he come home?

1947. Fires are racing along the coast of Maine after a summer-long drought, ravaging thousands of acres, causing unprecedented confusion and fear.

Five months pregnant, Grace Holland is left alone to protect her two toddlers when her difficult and unpredictable husband Gene joins the volunteers fighting to bring the fire under control. Along with her best friend, Rosie, and Rosie’s two young children, the women watch in horror as their houses go up in flames, then walk into the ocean as a last resort. They spend the night frantically trying to save their children. When dawn comes, they have miraculously survived, but their lives are forever changed: homeless, penniless, and left to face an uncertain future.

As Grace awaits news of her husband’s fate, she is thrust into a new world in which she must make a life on her own, beginning with absolutely nothing; she must find work, a home, a way to provide for her children. In the midst of devastating loss, Grace discovers glorious new freedoms – joys and triumphs she could never have expected her narrow life with Gene could contain – and her spirit soars. And then the unthinkable happens, and Grace’s bravery is tested as never before.

I hope you can keep cool while devouring these hot reads in this current heatwave, which seems to have engulfed most of the globe. 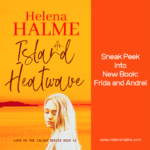