After two Masters Degrees and one professional qualification and many years’ experience of doing a job, it now appears that in order to do that same job for some-one else I need to begin a further paper chase. So I’m to become a student again, in order to show any potential employees (or clients) that I actually can do what I have been doing for the past 15 years or so.
I have no-one else but myself to blame. During my career I have often veered off the straight and narrow. At one time I wanted to re-establish myself as a journalist, then I wanted be a writer (2nd Degree), forgetting that what I really needed was this one qualification, the one I should have studied for from the very beginning when I went into business. But then I was young; too much in a hurry to see I was given bad advice. As a result, I opted for a qualification aimed at a student without a University Degree, one that would be a quick fix and one that would teach me the basics of that profession. Of course in the 1990’s a degree from Finland wasn’t exactly a commonplace thing either

The two-year qualification I took in the early 90’s was an excellent way to learn the basics. Unfortunately in my particular area, that qualification, though difficult to achieve and arduous to maintain, is not very well respected. Whether it’s because it’s mostly studied by women, I’m not sure. One of my business associates once called it a Ladies’ Knitting Circle. That was many years ago, but I do think that the reason why exemptions are rarely given at the right level for this qualification is that my Association is undervalued.

Hey ho, I sound bitter, don’t I? But I’m actually not. I have finally decided that I will bite the bullet and spend the next two years or so studying (something which I thrive on – I’m an eternal student). I am, after all, in a far better position to do it now than before: I have much more time than I did when we had the business, and of course, the children are no longer small.

The only worry is my writing: I know it’ll suffer. But, the urge I have to produce fiction is so strong that I think it’ll survive. In the past year when I’ve combined writing with working part-time with something totally different, I’ve found that I’ve been more productive than ever. Perhaps it’s the effect of this blog? Or because there no longer are any school children in the house? I don’t know. What I do know is that I will get that qualification, at last, even if it kills me.

Besides, you never know, I might even learn something.

Oh to be in England – Part Two 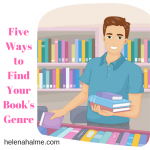