Those of you who have been following this blog know that we are midst of a house refurbishment. Still. I won’t go into the promises made to me about it all being ready (uh, uh) some five weeks ago. I’ll only tell you we’ve now reached the stage when entering the house from our relatively sane (but cramped) sleeping quarters in the sauna cottage, all I want to do is scream. Not only are we eating and working in the kitchen, we have been pushed to one side of it today as works are being carried to the various electrical connections. In the meantime not one other room in the house has been cleared, or finished.

I escaped this morning to my weekly Pilates class and even offered to do the food shop. I did have an ulterior motive, though. A new supermarket has just opened close to us. This isn’t just any supermarket, but a Waitrose.
I never thought I’d see the day when civilization reached these dark rural parts. Not in the form of a Waitrose with self-scanning. As I was going around the gleaming new store, merrily scanning the lovely foodstuffs, and placing them in my brand new Waitrose green carriers, I was truly happy.
I felt like the ladies in the BBC series, Inside John Lewis, who stormed the new store in Cardiff. I half expected to have a bunch of flowers stuffed into my arms as the first shoppers through the doors in Wales did. (Were you there Wildernesschic?)
Of course everyone I knew was there shopping at the new Waitrose too – and I’d left the house with messy hair and no make-up, wearing my beaten-up old track suit. I forgot with civilization you also get social interaction. But everyone was so enthusiastic about the new store that I think I might have got away with it. I made a note to self though: Must remember to at least wear clean track suit bottoms when I next (tomorrow) visit my new haven in the sticks. 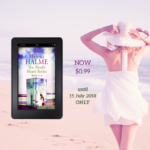