At my first Hay-on-Wye literature festival we were reduced to camping having booked too late to get a nice B&B in Hay itself. Well, I thought, sometimes you need to suffer for your art woman, what’s so terrible about sleeping under canvas for one night? The weather was wonderful but my back didn’t agree with the arrangements and protested violently the next day. 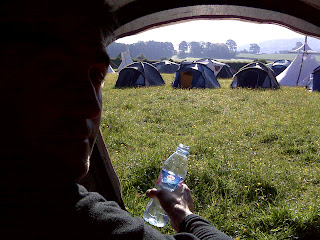 Luckily we’d booked a day and night of pampering in the wonderful Babington House on Tuesday, to celebrate our 2nd (a long story which I’ll explain some time soon) 25th wedding anniversary.

Back to Hay-on-Wye. Though I go and see many writers speak, I don’t really think these book festivals and writer appearances are a natural habitat for a writer. Writers should write, not perform. But, since I’ve enjoyed many talks, and often learn something useful, I was looking forward to our line-up for the Saturday.

Our first event was Henning Mankel, the Swedish crime writer, who’s books are being dramatised by the BBC. When we arrived, having first settled into our meagre dwelling at the Tangerine Fields campsite, we found that the great man was ill, and that instead there’d be a panel discussion on the state of our democracy with among others Marcus Brigstock and Helena Kennedy. I was thoroughly disappointed not to hear Mankel, but wouldn’t have missed this discussion for the world. By the end I decided to immediately apply for a UK passport and climb on the barricades to demand parliamentary reform.

Having calmed down a little, we looked around the Hay site and were disappointed. The food was average, the shops frankly rubbish and the general vibe, not to beat about the bush – old. Yeah, I know I’m not a twenty-something myself, but I always thought Hay attracted a younger, or at least more vibrant crowd.

At the next event Chris Pattern was flogging his latest book, ‘What’s Next, Surviving the 21st Century’, except he kept forgetting what he was there for. His interviewer had to remind him and the audience of the book by occasionally waving it in front of the last Governor of Hong Kong. The blue rinse crowd didn’t care, they hang onto his every word. Chris Patten gave his frank opinion on any issues in the world politics as well as domestic ones, peppering his views with hilarious anecdotes and stories. This man truly is a legend in his own lunch time.

As some-one who’s still in mourning over having finished watching all the five series of ‘The Wire’, I couldn’t wait for the evening event, Mark Lawson interviewing David Simon, the creator of series. The crowd at this event was noticeably younger. My partner whispered. ‘Everyone in this room should be given two votes, and those listening to Chris Patten none.’ I could see what he meant. The main thread of ‘The Wire’ is political corruption, a fact David Simon, a former newspaperman, sees as inevitable in a democratic system.

We’d started the day at Hay in the same manner as it ended: pondering about the future of our nation, and our world. What kind of place do we want our children and grandchildren to live in? We (or more accurately you, since I still only hold a Finnish passport and have no vote in UK general elections) certainly haven’t made a very good job of designing, or maintaining, a foolproof political system.

Marcus Brigstock put it aptly, ‘We have the political system we deserve.’ I’ve always maintained that if you don’t vote you have no right to complain about anything around you. Oops, better get that UK passport and vote then….