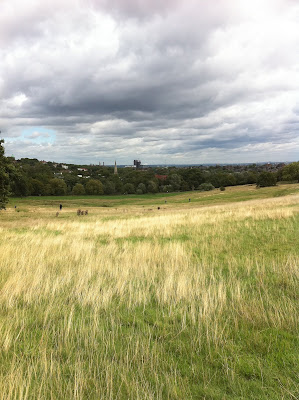 In the series of what a great city London is and what a great part of this city we are lucky enough to reside in, Hampstead Heath has to feature strongly. Before moving here, I’d only been to the Heath a couple of times when visiting friends. In those days the children were small and I was more concerned about keeping the toddlers in sight to appreciate the beauty of this vast green space in the middle of the city.

Also, the press the Heath gets outside of London is not always positive. I’m sure my mother-in-law would be horrified if she thought we spent any time on Hampstead Heath as she knows it only for its reputation with certain kinds of nocturnal activities.

But in the past few weeks I’ve been truly surprised how excellent the Heath is for everything from dog walking, playing with kids, kite flying to swimming.

There are several swimming ponds, including a separate one for just ladies (although not the Little Britain kind of ladies…). The great Liberty London Girl wrote about the Ladies’ Swimming Pond on her blog a few months ago but I couldn’t really get the sense of it until I saw it with my own eyes. 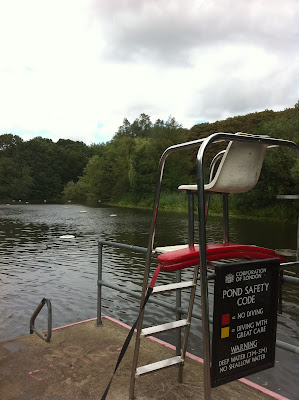 If you don’t feel that energetic – or brave now the air is getting cooler – you can just sit on a bench on the Heath and read a paper, or go and have a coffee in several of the outdoor and indoor cafes, do a bit of bird-watching or even go foraging.

Which is what my good friend and I did quite early last Sunday morning, when we took part in something called ‘Fungus Foray’ organised by the Heath & Hampstead Society. It was hosted by Andy Overall from the London Fungus Group, who knew everything there is to know about mushrooms.

Before this walk, I thought I knew a little about how to pick the right kinds of mushrooms. But my knowledge, which consisted of recognising a chantarelle (it’s yellow and feathery) and a cep (it’s round and brown with a velvety underside and it smells lovely), and the warnings all Finnish children get from their parents and teachers about not touching anything brightly red, anything with a skirt or anything with speckles on it, just weren’t anywhere enough to go and pick mushrooms on the Heath. After an hour and half following and listening to Andy, together with a keen group of about 15 foragers, I was more confused than at the beginning. All we seemed to find were mushrooms that would either kill you, make you very sick or were not very nice to eat. ‘I wish he could show us something we can actually cook with,’ my friend muttered just before the end of the walk, when we came across a few ceps. We even got to taste one and it was just as I remembered from the many enforced mushroom picking sessions my parents forced me and my big sister on: sweet and buttery.

So now I know which fungi to pick and one spot on the Heath where to find them. Together with fifteen other locals…guess I’ll be getting my ceps from the supermarket then.