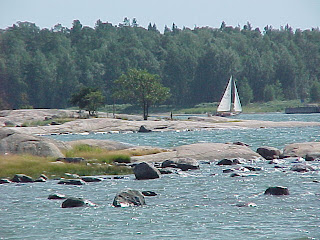 The Englishman didn’t phone the following day, or the day after that. On the Saturday morning, three days after I’d told him I wanted to finish it, I was woken up by a knock on my door.

A strong light filtered through the half-closed Venetian blinds on my bedroom window. The weather was continuing to mock me. That summer of 1982 was the sunniest I’d ever seen in Helsinki. It made everyone smile on the streets and in the bank, where, as the young summer intern, I was processing people’s mortgage applications. I had no desire to join them in their happiness. I just wanted to go to work, come home, watch TV and go to bed, where I’d lie awake trying not to think about the Englishman.

This weekend was supposed to be the hottest of the summer so far and, by the looks of it, the sun was already high up in the sky. I climbed out of bed and opened the door.

Even my Father looked happy. ‘We’re taking the boat out to the archipelago. Do you want to come?’

I thought for a moment, then nodded to him and closed the door. ‘Don’t forget your swimming trunks or whatever you women wear,’ he shouted through the door.

Without wondering too much about his good humour, or the strange desire to include me in the first outing of his latest purchase, I got ready and was soon on board the legendary ‘Paula’ as he’d christened his speed boat. The girlfriend and I sat at the rear while my Father, proudly wearing a blue seaman’s cap, steered the thing at high speed under the bridges on the Western shore of Helsinki. He was behaving like a child with a new toy, veering it this way and that, making us scream as he accelerated and made the boat bounce on the surface of the sea.

The girlfriend had made a picnic. ‘Did you have a nice time in Aulanko,’ she asked when we sat around a checked tablecloth she’d placed on the ground. I didn’t know what to say, but instead looked down at the food: a plateful of my father’s Gravad Lax, a packet of thinly sliced smoked ham, a loaf of rye bread, butter, salted gherkins. She handed me a paper plate and my Father picked up slices of ham with his fingers and stuffed them into his mouth. ‘Don’t talk about that Englishman,’ he mumbled to the girlfriend.

She stared at him, the sea breeze making her messy hair blow over the dark brown eyes. ‘I just wondered, because the weather…’

‘She doesn’t want to talk about it – can’t you see that?’ my Father barked.

Here we go, I thought and lay down shutting my eyes. The deserted cliff, which my Father had finally settled on, was warm against my bare back. I was so tired. I hadn’t slept through one night since the phone call from the Englishman.

‘Give her a Lonkero,’ I heard my Father say. The girlfriend handed me a cold bottle of the gin and bitter lemon drink. I smiled. I felt sorry for her. She had no idea what she was taking on with my Father. And I felt a pang of guilt – should I warn her about his drinking and his moods? Should I tell her that he’d hit my Mother? But all men were pigs. She was old; surely she would’ve worked that out herself by now?

As I lay in the warm sunshine, I wondered how it was that I’d let myself be completely steered by men. First by my Father, then by my fiancé and now by the Englishman. Wasn’t it high time I took decisions on my own life without considering a man?

We stayed on that small, rocky island all day. We swam in the sea and talked of old times. My Father told stories about when I was little. How he had to buy me a large box of chocolates to stop me crying when my older sister started school. How, lying on his back, he used to rock me on his belly when I was a little baby, and how my hair was wispy and thin. How I’d been ill with diarrhoea and vomiting and nearly died when I was four. How useless my Mother had been, just crying, and how he had to be the one to take me to hospital. I looked over to his large frame splayed on the rock, the round, smooth shape of his belly mirroring that of the cliff, and wondered if he remembered what happened just a few weeks ago when I was sick with a similar virus. But there was no sign that he’d made the connection. So I listened and smiled and laughed when required to. But I knew this brief interlude of good humour with my Father would not last.

At the end of the day, when he steered the boat into harbour, my Father pressed a few purple hundred Mark notes into my palm and said, ‘There’s a bit of money for a Lonkero or two. Go and enjoy yourself!’ He’d decided to stay with the girlfriend for the rest of the weekend. On the bus home, I though for once he was right. But how did he know about me and the Englishman? He wasn’t at home during the fateful telephone conversation. How, when he didn’t even remember that I was seriously ill a few weeks ago, did he notice that I was in need of cheering up now?

But I took his advice. When I got home it was only seven o’clock. I looked at myself in the mirror and noticed how the day spent in the sun had bronzed my face and limbs. There was no-one around to go out with, so I decided to do something I’d never done before. 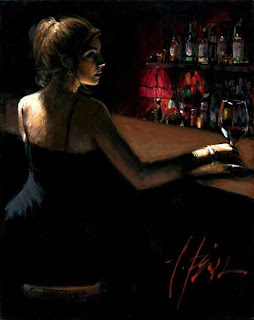 Wearing a bright green miniskirt, with a matching scoop neck top and black lace-up sandals, I walked alone into the University disco. It was half-full even though it was a Saturday night. Most students must be either travelling around Europe on Inter Rail or at their parents’ summer places. At least that’s why my friends were out of town. I went up to the bar and ordered a Lonkero. As soon as I turned around I spotted him. Leaning against the railings of the bar upstairs on the mezzanine floor was the 4th year boy I’d flirted with since I started at the School of Economics. He was looking at the dance floor, but hadn’t spotted me. I ducked out of his sight. My heart started racing. I realized it was him I’d come out to find. But now I didn’t have the courage to go and talk to him, or even invite him over with a covert glance or gesture. I lit a cigarette and tried to look cool. I gulped down the drink and ordered another. I needed get drunk. Fast.

‘What’s the hurry?’ the guy at the bar said and handed me the second bottle. I stubbed out my cigarette and said, ‘No hurry, I’m just thirsty.’ The barman smiled and in his eyes I saw that I looked good. I smiled back and holding an unlit cigarette and the drink headed for the stairs to the mezzanine level.