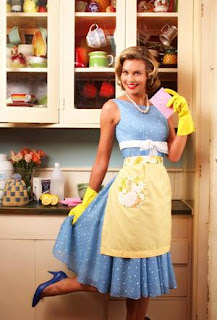 The Englishman and I drove up to Scotland on Boxing Day after a lovely, jolly Christmas with his parents in Wiltshire. The journey took a whole day. The Englishman had bought new tapes for the trip, ABC’s Lexicon of Love, Night and Day by Joe Jackson and East Side Story by Squeeze. We sang along to the tracks and I tried not to think how apt the lyrics of Tempted were to us. We stopped for lunch – scampi in a basket – in a pub somewhere near the Lake District, in the shadow of an imposingly dark mountain. The sun never made an appearance that day in December and we arrived in Edinburgh in the dim light of a Scottish winter afternoon. It was raining, but the warm welcome the Englishman’s friends gave us made up for the bad weather outside.
Lucinda was the first naval wife I’d ever met properly. Her husband, a balding man with a constant smile on his face, Richard, immediately went to ‘mix the drinks’. Then he took our bags upstairs. I was ashamed for the amount of luggage I carried. I wanted to explain that I’d taken heavy text books with me, but Richard just smiled and said, ‘Don’t worry your pretty little head about it.’ He winked at my Englishman. ‘You’ve done well there.’ I was glad Richard had turned towards the stairs and didn’t see me blush.

Lucinda was heavily pregnant. ‘I’m at the waddling stage,’ she said the next morning when she poured hot tea into two brown glass mugs from a flower patterned tea pot. I smiled at her and looked down at the steaming milky stuff in front of me. I turned my face away from the smell. How to tell Lucinda I didn’t drink tea?
The ‘boys’ as she called the men had left early for work at the Rosyth base. I’d not seen my Englishman in uniform since I’d met him at the British Embassy cocktail party in Helsinki two years before. He looked even taller than usual in his black trousers and a navy jumper with golden lapels. His eyes appeared darker. When he kissed me goodbye, I got a smell of diesel from the scratchy wool. ‘You girls can natter to your hearts’ content,’ Richard smiled. My Englishman winked at me and placed the white cap on his head.
Trying to drink my tea, I looked over to the central garden between the semi-detached houses that made up the naval quarters. The grass was lush and green, but the grey concrete of the houses opposite and the steely skies above made the space look oppressive. I glanced at my watch. It was only nine o’clock, eight hours till I’d see my Englishman again.
‘It’s laundry day today,’ Lucinda said and sighed, heavily lifting herself up from the chair. ‘I like to have a daily routine. Makes time pass quicker.’
I looked at her. She had a pretty face, with large pale blue eyes and a luminous complexion. Her long hair, which she kept in an old-fashioned loose bun, was very fair, almost grey. Her vast tummy had spread around her hips and to her backside. The middle of her body looked out of place with her slender wrists and small ankles. I wanted to ask how long she’d been married, if she’d had a career. Or what she’d done before dealing with washing and ironing, dusting and tidying. But Lucinda liked to talk, not to answer questions. She wanted to show how I too could become an efficient housewife. I promised myself never, ever to sink as low as Lucinda had, and never, ever have children.
We stayed two nights with Lucinda and Richard at their naval quarter, until a room in a flat became available on the day before New Year’s Eve 1982.
The Englishman and I drove to a part of Edinburgh called Leith in the dark. ‘It’s an old tenement building,’ the Englishman said, but I didn’t know what that meant. He parked the car on a narrow street, and hauled our luggage out of the boot. All I could think was that we’d have our own place for five weeks. We could come and go as we pleased, we could stay in bed all weekend if we wished.
The vast hallway had a wide, stone staircase. There was a strong smell of disinfectant. On the second floor landing the Englishman stopped in front of a door, one of many that looked exactly the same, and rang the bell. A slim dark-haired girl appeared, and immediately flung herself onto the Englishman. He kissed her cheek, and freeing himself from her embrace, pulled me to his side. ‘This is my girlfriend.’
‘Hi,’ the girl said and took my hand. Her slim fingers felt bony and cold.
The flat had high ceilings and smelled musty. Our room was the largest, overlooking the street. There was a mattress on the floor, an electric fire and a comfy chair covered in dark green velveteen fabric. Heavy brown curtains were drawn across a large bay window.
‘This is great,’ the Englishman said.
‘How do you know her? ‘ I asked as casually as I could after the dark-haired girl had left us alone in the massive room. The Squeeze lyrics rang in my ears, ‘Tempted by the fruit of another, Tempted but the truth is discovered’. Was this slim girl with the cold fingers the Englishman’s ‘mistake’? Would he really bring me under the same roof as ‘the girl’?
‘Oh, she’s the sister of a friend.’ The Englishman took me into his arms and kissed my neck. I closed my eyes and decided not to think about anything else but the sensation of his body against mine.