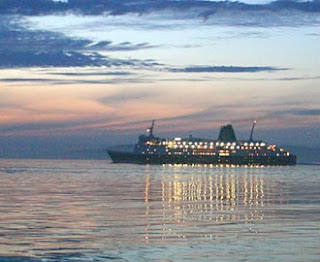 The drive from Edinburgh to was much shorter than the journey from Wiltshire to had been five weeks earlier. Sitting next to the Englishman in his yellow Spitfire I wished time would stop and we’d be on the road South forever.

I put the packet into my handbag. I didn’t need to be seasick to wish to die. The tannoy announced that the ferry was leaving in fifteen minutes. I lifted my eyes to the Englishman, trying not to cry. He took my face between his hands.

‘You’re eyes are very blue today.’ He looked at me for a very long time, then whispered, ‘I love you.’ We kissed.

And then he was gone.

I stood in the middle of the large space wondering if the ache would ever pass. A woman in her late thirties came into the cabin, dragging two heavy suitcases. She introduced herself, but I couldn’t talk. I nodded to her and mumbled my name. I sat on my bunk and pretended to look for something inside my bag, hoping she’d not see the tears running down my face. I tried to control myself but all I wanted to do was scream. My stomach ached, my chest felt as if it had caved in. As I watched the ferry pull away from the dock, with the afternoon light fading, it felt as if my heart was left on the jetty, a part of my body being ripped away.

I went to the cafeteria, which was full of lonely men, lorry drivers, I presumed. I bought myself an egg and anchovy open sandwich and a bottle of Elefanten. My Father had told me this was the strongest beer you could have and I wanted to be anesthetised. I spotted the packet of travel sickness pills in my bag and swallowed two, downing them with gulps of beer. After the meal I walked around the ship. I went up to the deck, or the ‘Upper Scupper’ as the Englishman called it. I smiled, then fought the tears again. I saw there was a film on later, some adventure tale or other in a couple of hours’ time. It was only six o’clock, but I felt tired and drunk from the beer so I decided to go and lie down in my cabin.

‘We were worried about you,’ the woman who I’d met when the ship was still docked at said. She had blood shot eyes and smelt strongly of alcohol. ‘Thought you’d died on us!’ she giggled.

I’d slept through the crossing. The woman told me the seas had been heavy and that many people had been sea sick. She’d decided to spend the time in the bar and had met a great guy. Why was she telling me all this, I wondered wearily. I felt slightly drunk myself, as if I’d been drugged. Then I remembered the sea sickness pills. Perhaps I shouldn’t have taken any alcohol with them?

The short train journey up to passed quickly. My mother greeted me warmly and I spent two nights with her and my sister. Eventually I had to return to and my Father’s house. He met me at the ferry terminal, together with the girlfriend. It was a Sunday morning and the sun was bright against the white snow at .

‘The wanderer returns!’ my Father said. He hugged me and I felt as if he was truly glad to see me. The girlfriend giggled and my Father said, ‘I’m going to take you both out to lunch!’

I nodded and thanked him, though I wasn’t at all hungry. In my ruined suede jacket I felt the cold and shivered. We walked towards my Fathers’ dark blue Saab.

‘Happy New Year,’ the girlfriend nudged herself close to me, ‘How did you celebrate the arrival of 1983?’

She launched into a long tale about a language course she’d attended years ago in . How she’d survived the month on Mars bars because the food was inedible. But how she’d loved the pubs and the beer in particular. I was bored and tried not to listen. Besides, she knew nothing about , the real . There was no proper coffee, that was true, and the whole country seemed to smell of milk that had gone off, but there was some good food. I’d never had chips which tasted as good as the ones the Englishman’s Mother made, or the cabbage salad, called coleslaw, they served with ham in pubs. And the ham was thickly sliced and tasty, not like the thin salty stuff my Father bought from the local shop. And there was no cheddar cheese in . I felt like crying again when I thought about the Gorgonzola I’d eaten with the Englishman, sitting on the floor of our flat in .

My friend at the was glad to see me too, ‘I thought you might not come back,’ she said when she hugged me.

I looked at her serious eyes. That must have been what everyone thought, I realised. My Mother, Sister, Father, the girlfriend. That’s why everyone was so glad – relieved – to see me. What did they think, that I’d just stay, marry my Englishman and abandon my studies for good?

The possibility hadn’t even occurred to me. Or to the Englishman.