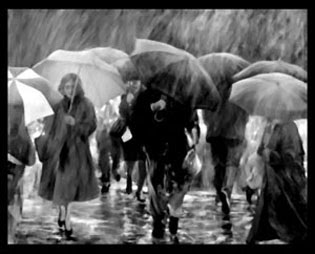 It was raining when the plane landed at Helsinki airport. The goodbye at Heathrow with the Englishman had been even more difficult than usual. I lost count of how many times we said ‘I love you.’
On the last day together we didn’t get out of bed until the afternoon. We talked about how we met all that time ago. Two and a half years seemed like an eternity to us.
I’d been sitting on the double bed, trying to pack. Sheets were strewn everywhere, my clothes mingled with the Englishman’s. He came out of the shower, with a towel around his angular hips. His hair was wet and he smelled of the special coconut aftershave his relatives in America sent him. He sat next to me and took my hands into his. ‘I wanted you so much that evening we spent wandering in the cold park in Helsinki. But you kept saying, “It’s impossible”’
I remembered the passionate kisses, the way the Englishman had looked deep into my eyes. And here we were still. Still in love, still longing for the day we could be together for ever.
‘I thought I was going to die if I couldn’t make love to you,’ he said.
Tears ran down my face. The Englishman took my face into his hands and kissed me, ‘Don’t cry.’
We didn’t talk much about the future. It seemed there wasn’t much to say. The Englishman promised to phone as soon as he heard from the Appointer.
After a brief silence he said, ‘I heard there is an engineer who married a Czech girl, but I think he’s a skimmer.’
I looked at him, ‘A skimmer?’
‘A Lieutenant in surface ships. They skim on top of the sea, not under it, like us submariners.’
Sitting in the posh Finnair bus I now wished I’d asked him if being a submariner meant you had a higher security clearance. But I could see he didn’t want to talk about it. Instead during those last 48 hours while he held me close he said he couldn’t imagine life without me. He kept taking my face between his hands and kissing me, telling me I was beautiful.
But was that just because he felt bad about putting his career before me?
I remember him telling me sometime in the beginning, perhaps it was at the Embassy Cocktail Party, how he loved the Navy even if it meant being away at sea for long periods. Even if it meant being away from loved ones. ‘It’s what I’ve always wanted to do,’ he said. In his eyes I saw loving what he did, being good at his job, meant a lot to him. It was what he lived for. The Royal Navy was his life.
So what if the Navy said he couldn’t marry me?
If we didn’t get married I wouldn’t get a work permit in the UK. And I couldn’t just move to England and not work. I needed to be good at my job too. One of the many things we had in common: We were both ambitious.
The rain ran down the windows of the Finnair bus. There was a lightening strike. I wished I could be back in ‘Sunny Southsea’ as my Englishman called the part of Portsmouth where his friend’s little house was. When I said I agreed, the Englishman laughed at me and said, ‘It rains here too!’
‘But you call it “Sunny”’ I protested.
‘It’s called sarcasm, or British humour. You’ll get the hang of it,’ he’d said and pulled me close to him.
The bus driver had a sports programme on the radio. Barbra Streisand came on singing ‘A Woman in Love’. The way the Finnish announcer pronounced both the artist and the song in his heavily accented English made me smile. I thought how it would make the Englishman laugh. I allowed myself to listen to the soppy song and dream of life in England, together with my Englishman. How could I bear being without him? When once again I had no idea when I’d see him.
I looked at the wet Helsinki streets, through the sodden bus window. People were walking fast, with their heads hidden underneath black, sombre umbrellas. No-one was smiling, no-one holding someone else’s hand, everyone just on their miserable own. I couldn’t believe I was back here again. This city oppressed me, with its tall bulky buildings, it’s unhappy people. None of them can have known love like we have, I was sure of it. The Barbra Streisand song was cut off half way through when some sports results were announced. I looked at the front of the bus and noticed the luggage tag dangling from my suitcase in the rack at the front of the bus said ‘Hel’.
I was back in Helsinki, ‘Hell’ for short.