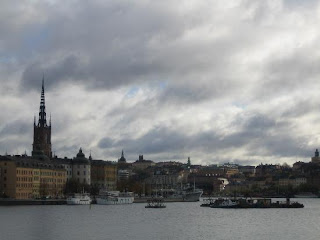 The Englishman and I took our first ever flight together from to on the day before Christmas Eve in 1983. Though there was no snow on the ground, and the landscape looked dark and miserable, it was magical. To be standing together in the passport queue, rather than saying goodbye on the other side, seemed unreal. Then walking through the airport terminal holding hands, looking at the tax free shops, selling furs, china or wooden goods to tourists, felt so wonderful that I wanted to pinch myself. Surely I was dreaming? The Englishman bought a bottle of Gin, although he said it would have been half the price in . He’d fretted about not having any presents for my Mother and Sister but I gladly put both of our names on the little cards to go with my gifts. These were our first Christmas present given together.

As soon as we arrived in my Mother’s small flat in Lidingö, she announced there was going to be an engagement party on Boxing Day. I blushed, thinking what the Englishman would make of my Mother’s friends, some of whom were a little eccentric. There’d be the Polish dentist, who called herself my aunt, and who kept telling me to sit up straight about ten times during a visit, and to beware of Communists twice as many times. My Mother’s childhood friend whom she’d lost contact with only to renew the friendship after a chance meeting on the ferry 20 years later. I must have heard the story a hundred times of how they’d found out that they both now lived in only a few miles apart. She was lovely but her husband was a self-proclaimed alcoholic who couldn’t stop drinking in spite of loud protests from my Mother’s friend. He always ended up passing out during any get-together, sparking a loud marital row.

Then there was the dog.

Having nagged her for years, my Mother had eventually succumbed and got Jerry for my sister and I right after the divorce. Now 12 years later the cocker spaniel was old and frail. He could no longer control his bladder and often ended up peeing in the hallway of my Mother’s smart block of flats. Once outside, the dog wanted immediately to come inside again, having done its business. So whoever was unlucky enough to take him for a walk would have to drag the stubborn animal around the streets, appearing ridiculous at best and at worst cruel to any bystanders. With all the cooking to be done my Mother felt the Englishman would be perfect for this task, especially as he kept offering to ‘do whatever to help’. I tried to warn him but to no avail. He just smiled, kissed me on the lips and said, ‘Don’t worry, I’ll be fine.’

‘He’s stronger than he looks,’ the Englishman said when he returned with Jerry. The Englishman told me how the dog had decided to do a ‘number two’ in the middle of the zebra crossing, in front of a bus full of people. He said he’d never seen so much angry glaring and head shaking as he tried to drag the squatting animal across the road.

On Christmas Eve, after the long meal had been consumed and the presents distributed, I joined the Englishman and Jerry on their nightly walk. I’d wanted him to experience a true Nordic snowy Christmas, but the weather was still mild and only rain so far had fallen from the sky. At least it was now dry and when we reached the dark end of the road, where there was a narrow path down to the sea, stars twinkled in the night sky. I lifted the shivering dog up and the Englishman traced the galaxies with his gloved hand. ‘There’s Venus, look, and that’s ‘The Plough’. I looked up into the black sky and wondered how some-one could ever be this happy.

The Englishman was quiet for a moment. Then he put his arms around me and I placed the dog gently onto the ground. ‘I’m very happy,’ he said and kissed me. Then, looking into my eyes, in his faltering Finnish, he said, ‘Minä rakastan sinua’.

I had tears in my eyes when I replied, ‘I love you too.’

Because my sister had kindly lent me her flat, which was one floor below in the same block as my Mother’s, the Englishman and I had lots of time alone at night and in the mornings. Had it not been for my Mother’s strict time table and all the cooking that needed to be done, we would never have left the warm bedroom.

On Boxing Day the Engagement Party was due to start at 2 pm. My Mother’s school friend and her small bearded husband arrived half an hour early. She was twice his size and wore a large paisley-patterned poncho. The Englishman and I were lost in her warm embrace. She’d brought along her daughter who was the same age as my sister and already friends with her. I looked at her with relief, even though I’d only me her once before. At least there’d be one more person of our age at the party.

My Polish aunt arrived half an hour late and my Mother had already been worried she’d not come at all. But through the door she flowed, wearing a tight black satin skirt and a cream frilly blouse. ‘Ah, stand up straight, girl!’ she said in her strongly accented Swedish, as she hugged me. Turning to the Englishman she said, ‘Let me see…’ There was an awkward moment when she started to rummage around in her handbag with one hand, while holding onto the Englishman with the other. He gave me a look of panic, but finally my aunt found her glasses, put them on and started to examine my Englishman more closely. I looked at my Mother, but she just shook her head. There was nothing we could do but wait for the verdict, hoping it’d be an agreeable one.

After what seemed like an eternity, she exclaimed, ‘Dobry!’

‘Good?’ My mother said in Swedish. ‘Tak!’ She smiled broadly at me and the Englishman. ‘See, your Mother speak Polish fluently!’

I translated her Swedish words to the Englishman. He looked a little pale, so I took his hand and led him to the lounge where the small bearded man was already drinking vodka and coke. He lifted his glass and smiled. He very rarely said more than two words. During the past twenty years while the couple and their daughter had lived in only my Mother’s childhood friend had learned a little Swedish. My Mother disapproved of this. ‘All their friends are Finns,’ she’d said to me. ‘So they don’t learn the language. I’m not going to be like that. Besides, I already speak it very well.’

As we sat around the small coffee table and ate the Princess Tårta, my favourite Swedish cake, which Mother had somehow hidden from me during Christmas, the conversation ran more of less smoothly in three languages. I did most of the translating, while sitting close to the Englishman holding onto his hand.

The Finnish man got drunk as usual, and as usual they had to leave early to avoid a huge argument. ‘See what I have to put up with!’ my Mother’s friend said as she led her family into a waiting taxi.

My Polish aunt spent most of the time gazing at us, sometimes wiping the corners of her eyes. When she left, she held onto our hands and said, ‘Ah, you both so young!’

I was surprised by her words. I felt terribly old and experienced. Certainly old enough to be engaged and soon married.

We hadn’t decided on a date for the wedding yet. The Englishman’s course in had ended before Christmas and he didn’t know what his next job in the Navy would be. ‘The Appointer is aware I’m getting married in the summer and won’t send me to a submarine due to sail before then.’

‘Getting married in the summer,’ rang in my ears as I waved goodbye to the Englishman at airport a week later, clutching the red rose he’d again bought me.

‘This will be the last time we have to do this,’ the Englishman said before he went through the passport control. He stroked my hair. I tried not to cry. Knowing we’d soon be together didn’t make saying goodbye any easier. I felt the ring on my finger and prayed that the few last months I’d have to spend in would pass quickly. As I watched him disappear from my view, it suddenly occurred to me I’d have to organise a wedding too. I ran out of the airport terminal and into the waiting bus. There was so much to do!