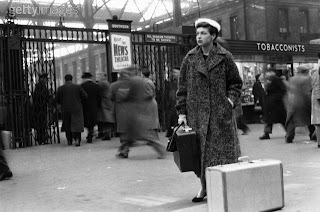 The last leg of my train journey across Europe in February 1984, from Harwich to London Liverpool Street Station, seemed to take forever. I was dead tired from three days of travelling and I’d not slept a wink during the Channel crossing. By the time I’d got to the train at Harwich it was full, with the only free seat in the smoking compartment. Sitting there amongst people puffing at their cigarettes, I suddenly fancied one myself, even though I only smoked when I had a drink. It might perk me up a bit. But the unopened carton of Silk Cut I’d bought in the tax free shop, mainly for the Englishman, was inside my red Marimekko shoulder bag on the parcel shelf. I lifted my eyes to the bag, then looked at a gangly boy who had the seat next to me. He was fast asleep, with his head resting on his chest and his mouth open. His breath smelled of alcohol. His long body was blocking my way to the aisle, and I had no wish to wake him. Instead I looked out of the window and glanced at my watch. I couldn’t close my eyes and snooze. We were moving through startlingly green landscape. There was no snow and the sun was shining brightly. I leant my head against the seat. Only two hours until I’d see the Englishman. Only two hours until I’d officially moved to England.
When the train at last pulled into Liverpool Street Station I waited until most people were out of the carriage. The gangly boy carried my heavy suitcase down the steps and onto the platform. I smiled a thanks to him and he gave me a nod. ‘No problem Darling,’ he said in a Scottish accent.
Once I’d fixed the wheels onto the suitcase, I quickly walked down the long platform towards a busy station concourse. I looked around and tried to spot the tall Englishman. But I couldn’t see him. I waited for five minutes, then began to worry. People were looking at me and I became conscious of my appearance. I felt shabby in my dark blue jeans and tennis shoes amongst the smartly dressed businessmen in their pinstripe suits and dark overcoats.
There were several phone booths in the middle of the station, and I wondered if I should place myself in the queue. But who would I phone? I didn’t want to talk to his mother in Wiltshire, and I guessed she wouldn’t know where he was anyway. I didn’t know if anyone was at home in the house in Southsea. Besides, I’d never used a phone booth in England. It was bound to be completely unlike the Finnish or Swedish ones. Everything; trains, the metro, buses, banks and shops worked differently here. They even drove on the wrong side of the road. I dreaded to think how impatient the people behind me in the queue would become when I tried to work out the telephone system. No, using one of the booths wasn’t an option.
I decided to stay put and wait. Perhaps the train had been early, I’d not checked what time it was due to arrive, all I knew it was mid-morning on the Wednesday. Perhaps the Englishman had got the wrong day? I was sure I told him clearly the day when he’d phoned me in Stockholm the Monday before. He’d made me smile when he told me how much he was looking forward to staying in the house together, even if it was for only a couple of weeks. He was leaving for his NATO job in Naples two weeks on Monday. Perhaps something had happened and he had to go early? But surely he would have arranged for some word to be sent to me, or for some-one else to come and meet me instead?
I began to feel angry. Why of all the times, was he late this time? When I’d told him about the awful goodbye with my Father, and everything else I’d endured before leaving Finland. Surely he must have known how important this time was for me? I though briefly how my Father would, no doubt, be delighted to see me now. ‘I told you, foreigners can’t be trusted,’ he’d say. Then I saw in front of my eyes the satisfied face of my ex-fiance, ‘See, he’s left you in the lurch, just as I told you he would.’
I took a deep breath.
I saw a row of plastic seats by the side of the stairs and made my way to them. I sat down opposite the station clock and looked up to it. I dug a packet of Silk Cut out of my bag and lit a cigarette. I decided to wait until two o’clock. That was over an hour from now. If the Englishman hadn’t turned up by then I’d take a taxi to the nearest hotel and take a room for the night. I had just about enough money. I tried to convince myself that it wouldn’t come to that. Any minute now The Englishman would appear in the centre of the station concourse, look around, spot me, run and fling his arms around me and apologise profusely.
But the Englishman was no-where to be seen.
THE END