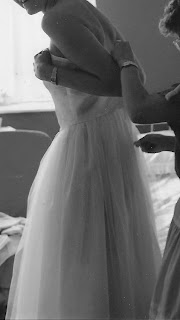 I spent most of the spring of 1984 alone in the house in Southsea, studying for the final exams I was to take at the Finnish Embassy in Chelsea. Before the Englishman left for Naples, he’d set up an small office for me in the unoccupied middle bedroom. We found an old trestle table in the lean-to conservatory at the back of the house, which I wiped clean and set all my books and papers on, as well as the old typewriter I’d lugged all the way from Finland with me.

Sitting at the rickety table, I gazed at the neighbour’s garden beyond our narrow one. The house opposite looked identical to our house and was occupied by a young family, where the mother was always at home. I often saw her during the day, washing dishes at the kitchen sink, or hoovering in the living room.She usually wore a skirt and a blouse, but never looked up. I guessed she was too busy to worry about her neighbours.

The Admiral’s son was rarely at home; he spent his days as well as many evenings at the base in Portsmouth. Occasionally he’d come back to his rented room early in the afternoon and offer me a cup of tea, which I accepted. I’d decided to start drinking tea, even though the mere smell of the milky drink made me wince. When I’d stayed with the Englishman’s parents in the country, I found I couldn’t consume as many cups of coffee a day as the English did tea. Besides, I wanted to surprise the Englishman when he returned with my new, very British habit.

One evening in early March the Admiral’s son was back from his course before I’d gone to bed. I’d stayed up hoping for a call from the Englishman. It had been three days since we last spoke and I was dying to talk to him. The Admiral’s son made us both a cup of tea. He perched on the worn-out settee next to me. After he’d talked about the weather – it’d been raining every day that week – he finished his tea and fiddled with his empty, brown glass mug. He glanced at his watch and yawed. ‘Guess it’s time to turn in,’ he said but didn’t move. It was past midnight.

I picked up my half-drunk tea and his empty mug and took them to the kitchen.

‘Oh,’ the Admiral’s son said and half rose from the settee.

‘Good night,’ I said and started to walk up the narrow stairs.

I heard him cough and turned my head towards the living room. ‘Hmm, if you don’t mind, I was going to make a phone call…’

‘In that case,’ the Admirals son lifted his eyes to me, ‘It’s long-distance…a girl I met in Australia.’

‘Aah,’ I said and smiled. I felt like an old, experienced woman. As I lay in bed and tried not to listen to the muffled telephone conversation below me, I thought how far the Englishman and I had come. From meeting at the British Embassy four years ago, to walking down the aisle together in less then three months’ time. I thought about all the happy and tearful phone calls we’d had; the heart-breaking good byes and the blissful reunions; the many misunderstandings and then the realisation we couldn’t live without one another. My stomach tightened when I thought about the wedding. I could hardly believe it was going to happen.

But the invitations had been sent. The English guests had all replied; there was going to be a total of ten of them. They had even bought their flights, and my sister had booked the hotel in Tampere. My flight back two weeks before the wedding was booked as was the Englishman’s. He was to fly together with the guests a few days before the ceremony. All he had to do was to get a Certificate of Non-Impediment so we could marry in Finland. All I had left to do was to find a suitable silk tulle fabric for my dress and send it onto my dress-maker friend. I’d planned to do that after my first exam in London. I knew exactly what I wanted to buy and had the addresses of three shops which sold fabrics near Oxford Street.

The Englishman had given me a map of London and told me how to take the tube from Waterloo station to Sloane Square. Being alone in London was scary but exhilarating. I followed the Englishman’s directions and found the right line and the right stop on the tube. As I emerged from the dark tunnels, carrying my black leather briefcase and dressed in a sombre black suit, I walked fast towards the direction I thought Chesham Place was from the station. It was around noon on a Tuesday in mid March. I tried to match the steps of the people rushing around me, wanting to pretend I too was part of the hub of the city. I didn’t want to appear a tourist and avoided looking at my map.

The Finnish Embassy turned out to be just beyond a large green park, fenced off with freshly painted black wrought iron railings. There was a sign that read, ‘Private’ and I presumed the right to use the park belonged to the owners of a long row of white stucco fronted houses. They had tall windows draped with heavy curtains. Along this wide street there were fewer people about, so I slowed my pace and at last dared to look at my map. I was very close and turning a corner I saw the Finnish flag. The simple blue cross on a white background brought a lump to my throat.

On my last visit in late April 1984, the staff offered me to have a sauna there. One of the previous Ambassadors had built one in the basement and that evening was the sauna night of the female Embassy employees. They had one once or twice a month, if the Ambassador wasn’t entertaining. I’d not brought a towel, nor a change of clothing so I declined. The secretary said ‘What a shame,’ and hugged me. She wished me well and made me promise to come and say hello to her when I needed a new passport.

Usually when I left the Finnish Embassy I felt tired but glad another exam was over. I was in a hurry to get away, whether it was to go shopping on King’s Road, or to take the train back to Southsea. This time I felt a lump in my throat. It was as if another tie to my mother country was severed. Even though the Embassy would always be there, I knew it wouldn’t be the same to come back as an ordinary Expat to renew a passport. I’d never again be offered to have a sauna, or sit in that little room, officially a part of Finland, feverishly writing, straining to remember anything I’d learned at my temporary desk in the little house in Southsea.

Outside the sun was shining and as I hurried to catch the next train from Waterloo, I remembered I was to meet the Naval Padre the following day. My new life was starting, so there was no point in mourning the old one. The Padre was to issue a Certificate of Non-Impediment to the Englishman. This was the final piece of red tape we needed for the wedding to go ahead in Finland.