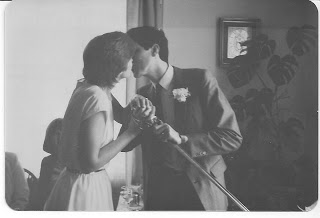 After the registry office wedding I suddenly became somebody in . I had a banker’s card and a cheque book which my new husband had organised for me. I had a title, Mrs X, which immediately brought respect whether it was when paying with my brand new cheque book in the local butchers or arranging driving lessons over the telephone. During the following two weeks, which I spent in the house in Southsea, with the occasional company of the polite and friendly Admiral’s son, I forged a new life, a new set of rules to live by. Gone was my solitary life with my father, my nights out with my friend, the long hours spent in the Hanken library cramming for my exams. Instead I spent the mornings writing my thesis on the rickety table with my grandmother’s old typewriter. At about noon I’d walk down to the end of the road to buy food for the day and post that days’ letter to my husband. In the evenings I’d either watch TV, or pop over to my neighbour’s house, where sitting at her kitchen table we’d chat. I’d tell her the latest news on our married quarter. We were waiting to hear when we could move in and, more importantly, where. Even with my elevated position as a naval wife, I still couldn’t find out from the Navy’s housing officer which flat we’d been allocated. I wanted to know where our new life as a married couple would truly begin; to picture our home together. Continuing to live in the terraced house in Southsea seemed like being in limbo.