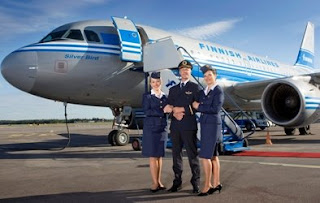 The Finnair flight to Heathrow in August 1981 was almost empty. There were two air hostesses and one steward, who kept me topped up with orange juice and water. I was nervous. I’d never been to England before. I was used to travelling on my own, but London was a big city to get lost in.

As the plane swung over the Thames, the very blonde haired air steward came and sat next to me. ‘Been to London before?’

‘No,’ I answered, thinking, what if the Englishman is not there to meet me?

‘That’s Big Ben, and there’s Tower Bridge.’ He leant closer to point out the rest of the London landmarks through the window on my side. He smiled, flashing a perfect set of white teeth. As we left the centre I saw rows and rows of houses. There seemed to be no end to them.

The Englishman was waiting for me. He took my bag and gave me a long kiss. The steward from the plane came past and waved to me.

When I told him how kind the Finnair guy had been, he said, ‘I bet.’ It was the first time the Englishman had been jealous of me. It felt good. I pushed myself closer to him as we walked to the car park.

The air outside the revolving doors of the airport terminal was warm. It smelled of sour milk and traffic fumes. There were people everywhere.

‘Here, put this on, it’ll keep your hair in place.’ The Englishman opened the car door and handed me a Red Sox baseball cap. He’d told me in his letters he had an open top Triumph Spitfire. ‘It’s yellow, but that means I won’t be missed on the road!’ The car looked tiny. The seats were black leather and very low. The Englishman rolled down the top and sat beside me. ‘It suits you,’ he smiled and kissed me again. ‘It’ll take us a couple of hours to get to Pompey.’
The warm air rushed past my face. The busy concrete spaghetti junctions were followed by rolling green hills with occasional cows grazing by the side of the road. I felt so happy I could burst. While travelling at any speed, with the Spitfire top down, we could only hear each other by shouting, but occasionally the Englishman would lean over, take my hand and squeeze it. He’d smile and pull it to his lips.

Suddenly there was water on either side of the road. ‘This is Southsea,’ the Englishman said and slowed down. We drove past the Common and down along the seafront. At one end was a large Ferris Wheel, then a long promenade. People in ones and twos, some with their children or dogs strolled along the pavement, laughing and chatting to each other. I realised we were nearly at the house the Englishman shared with his Navy friends. I grew nervous again. What if they didn’t like me? I’d chosen what I wore very carefully, but now felt shabby and old-fashioned. What if his friends were very smart?

From the seafront the Englishman drove down one street, and turned into another, then yet another. They all looked alike, with rows and rows of the kind of houses I’d seen from the airplane. The street names were displayed on white signs attached to low-slung brick walls. He stopped on a tree-lined street called ‘Winter Road’ and said, ‘We’re here!’

The door to the house was ajar. The Englishman took my hand and led me inside. ‘Wait here,’ he said. I stood in a shabby looking room with a worn-out sofa, a large TV and a stereo with two speakers either side. A stack of LP’s stood on the floor. A wooden staircase next to a narrow hall had a strip of carpet on it. The Englishman leaped up the stairs taking two or three steps at a time.

A guy with light-coloured hair in a faded t-shirt walked in from the hallway. He was barefoot. ‘You must be the Finnish girlfriend.’

I took his outstretched hand and smiled. He was followed by a shorter man with dark, tidy hair and clothes. His girlfriend came after. She had short sandy coloured hair and dark eyes. They both smiled and shook my hand too. My Englishman tumbled down the stairs. ‘Oh, here you all are.’ We stood in a circle and for a while no-one spoke.

‘I’ll show you my room,’ the Englishman said. His friends sniggered until the English girl looked sternly at them. I was very embarrassed but allowed myself to be led up the stairs.