Firstly do not book the theatre for the same night (and exact time) as the first England football match in the World Cup. With Husband who’s so mad about sports he’d watch extreme ironing from Dubai if it existed (please don’t tell me it does..?)

In my defence I’ll say that these tickets to see the late Swedish Film Director Ingmar Bergman’s Through a Glass Darkly were booked over six months ago by our friend and no way could we have known that the game was on at the same time. Also the cast included the rather lovely Ruth Wilson, an actress who most recently adorned our screens in a new BBC cop series, Luther, and who’s artistic merits Husband was quite looking forward to inspecting more closely.

Secondly, when booking a restaurant to eat in pre-theatre, do make sure you a) know how long it takes to walk to the chosen venue (The Almeida), b) DO NOT trust the pretty but wholly useless map provided by your chosen eatery (Fredrick’s), c) do keep an eye on the time when in said eatery, because invariably however much time you have you’ll run out of it, d) do not trust any taxi drivers who might helpfully point you in the opposite direction.

Thirdly, when you finally arrive at the theatre, panting, suffering from a stitch caused by the post-food-jog, be graceful when the staff tell you that the play has started and make you sit outside the (closed) bar watching a teeny screen from which you can’t even decipher the language the play is performed in.

Fourth, be grateful when, after quarter of an hour, you’re given seats in the corner of the Gods, in seats which would have cost you about half of what you paid for yours, and you can only see half of the set and the cast.

Fifth, be glad that Husband when realising the futility of the situation, takes his chance and flees to the nearest big screen pub to watch the game. Also be happy, when at the end of the night he’s elated for having been able to watch the match even if he’s disgusted about the complete muppetry shown by the England goalkeeper. (This is worthy of another post; don’t let me get started on the subject)

Finally, do not fret that you can’t actually write a comprehensive review of the play because by definition you only saw half of it. The bits you saw were brilliant, particularly Ruth Wilson’s portrayal of a young woman, Karin, who suffering from mental illness, seemed so sincere and natural it upset you even if for the most part you couldn’t really catch her facial features. Dimitri Leonidas, who played the young Max, Karin’s brother, was also excellent. His confusion at witnessing the agonies of the grown-up world, and his belief in the goodness of people brought tears to my eyes. I hadn’t seen this actor before, but hope I’ll see a lot more of him in the future. 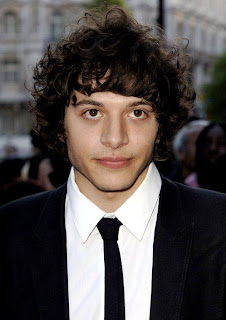 He does look rather fine (for a young man that is), doesn’t he?


There will now follow a two-month summer break before the next theatre review. That one I’m hoping to carry out in the traditional manner after actually having seen the whole of the play from my own, pre-booked seat.

King Lear at The Donmar Warehouse