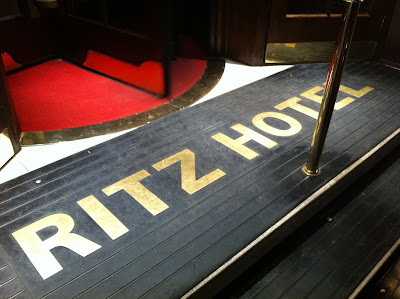 I’d been planning the long weekend my mother and her husband spent with us in London for a while. It was their first visit to our new place and although I wanted them to be entertained, I didn’t want to litter the few days with back to back theatre/museums/restaurants. So I booked one musical, Sweet Charity, and a pub lunch on the Sunday.  On top of that there was some impromptu shopping, boating on the Thames and viewing London sights from a double decker bus. And of course a walk on the Heath with the terrier.

My priority was for us to have time together, for the two of them to get their bearings in London; to get used to the sights and smells of our new city. My mother had been before, of course, but her husband was a London virgin.
The first disaster happened a few weeks before their arrival: an email from The Theatre Royal Haymarket informing me that the production of Sweet Charity would be terminated early.  It was now too late to book similarly good seats at another show, so having discussed it with my mother, we decided to forget about going out on the Friday night. Instead I booked a late (5.30) Afternoon Tea at the Ritz. It would be traditionally English in plush surroundings – perfect for the oldies, I thought. Besides, I wanted to go as I’d never had tea there, but had been to the Rivoli Bar for pre-dinner cocktails and enjoyed the old world charm of the place.
We arrived early and were met with this view.
And this was where we were going to be having our tea.
‘Aah,’ said my mother.
I found the Maitre D’ looking through a large ledger by the side of the tearoom and after giving him my name he exclaimed, ‘You have booked a tea with Champagne!’. He looked me up and down, then settled his gaze on my forehead. ‘Yes,’ I said, while starting to feel a little uneasy. ‘Take your outer clothes to the cloakroom and then come back here,’ he commanded.
There was a long queue at a side door which I took to be the cloakroom. Inside was one elderly gentleman, slowly dealing with people’s shopping and coats. It took 15 minutes for us to get to the counter. To say his attitude to the customers – mostly tourists, I noticed – was brusque would be letting him off lightly. To the woman in front of me he was openly hostile and rude. All because she happened to have a few shopping bags she wanted to deposit in the cloakroom. A sin for anyone wishing to take tea at the Ritz, obviously. I was beginning to feel that we were in an unfriendly place which takes its customers for granted.
We had been early, but by now it had gone past the time we’d booked the table for. I was bracing myself for another verbal assault by the Maitrte D’, but was relieved when a waiter spotted us and took us to our table.
The tearooms were full, and as the waiter took out tea order, I felt a little better. Perhaps this, although not exactly a cheap activity, was a good idea after all. My mother beamed when the silver tea pots arrived, followed closely by the glasses of cold champagne. Although at this level of pricing, the champagne should really have been served from the bottle, it tasted right with the requisite amount of bubbles. Then a three-tiered cake stand was put in front of us, with a fast run-through of the different sandwiches and cakes. The waiter didn’t invite questions, and even though I didn’t understand most of what he said, I didn’t feel like interrogating him. But one question he’d obviously been prepared for because next he pointed to an empty middle tier and informed us, ‘The scones are freshly baked and will be served warm later.’
I peered down to take a closer look at the small squares of what looked like smoked salmon, cucumber, ham and cheddar sandwiches. The bread looked suspiciously ordinary, and when I took a bite out of the salmon one, I knew it was the cheapest supermarket bread you could find. The salmon too was tasteless and had the consistence of  a wet leather glove. There was no taste to any of the sandwiches. If I’d been blindfolded I’d not been able to tell which kind I was eating. Lord Sandwich must be turning in his grave.
Unfortunately the various cakes were equally flavourless, and as for the scones…if there was a Lord or Lady Scone, they too would be horrified. The things were more like really bad  long-life sponge cakes that you can buy in cardboard boxes at the local petrol station. Rather than ‘freshly baked’ they were freshly microwaved. The jam too was manufactured, it was difficult to tell what kind of fruit had been used in its preparation. Certainly a lot of E numbers and other artificial sweeteners were involved. Only the clotted cream was edible.
As I sat there and tried to eat the horrible, tasteless food, I wondered if this is what gives British cooking a bad name? If an old institution like this can serve such utter crap (at high prices), it’s no wonder most Europeans consider London a culinary wasteland.
I wish I’d been strong enough to refuse to pay the bill when it arrived. But, for one, I was with my dear family. I didn’t want to Make A Scene; besides I truly doubt whether the staff, who at best could be described as going through the motions, would have taken any notice of my complaints.
Oh, I nearly forgot – the piano playing was poor too. And, they insisted the gentlemen wear jackets and ties to take tea. What nonsense!
Worst of all, I feel such a numpty – I should know better than take my nearest and dearest to a tourist trap such as this. I sort of pride myself at not falling into any of them in London. And here I was in tourist-trap-land extraordinaire! Worst of all, as a birthday present for a friend,  we recently bought a gift voucher to have Tea at The Ritz. I’ll never live that one down….