We arrived on the island of Åland five days ago now. It was late at night and we’d spent the whole day travelling, first by plane from London to Stockholm, then by ferry to Mariehamn. My mother and step-father’s house where we’ve spent most of our summer holidays since the children were born is just a few minutes drive from the Capital, but you’d not know we are anywhere near ‘civilisation’. Well, apart from the occasional rush of cars that speed past when the bridge is lowered after it’s let a ‘rush’ of sailing boats pass the Lemströms Kanal.

Husband and I were delighted to find we were going to be sleeping in the sauna cottage, where the sun coming up over the horizon wakes us early and where a swim in the Baltic is just a hop and a skip away. The quality of sleep is different too; we never get so many hours solid rest as we seem to do there. It could be the sea air, or it could be what my mother calls the suopursu-effect. She says the plant, in flower, has calming properties. The sauna cottage is surrounded by these flowers. As this year we have wireless internet access for the first time, I was going to investigate if there was any truth in it, but decided to suspend disbelief instead. Knowing the science behind it would, I’m sure, affect my sleep.

Perhaps it’s just the slower pace of life on the island that makes us restful and relaxed. Although my mother still works part time in Stockholm where she has a small flat, she has a large vegetable garden here on the island and produces everything from raspberries to courgettes to potatoes. While my step-father helps with the vegetable gardening, he also looks after a few cottages he rents to summer guests, as well as makes the occasional fishing trip and makes sure everyone’s glass is always filled at parties. He’s also known for his excellent schnapps singing voice.

Two days ago I wasn’t so thankful for my step-father’s ability to welcome his guests, as my head was thumping after the first of (I predict) many parties during our stay here. But today we were all feeling a little sharper.

So this evening my stepfather asked husband and daughter if they’d like to go with him to pick up nets he’d placed just off the shore by the sauna cottage earlier. ‘Don’t think we’ll get any, though,’ he said and got onto his bike, closely followed by husband and daughter. After about half an hour daughter ran into the house shouting, ‘We’ve got at least 15!’

‘Oh oh,’ said my step-father. He’s a typical fisherman. ‘I wanted four or five, not this many!’ I could see what he meant; getting the awkward slippery things out of the nets with a poor eyesight wasn’t easy. Luckily husband helped. When all were freed, we counted 17. ‘Jävlar också!‘ said my step-father.

Then it was time to gut the fish and salt them. Ready for the smoker tomorrow evening.

Lets just hope there’s no rain tomorrow and we can sit outside and eat while watching the sun set behind the tall pine trees in the distance. 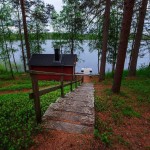