After my post here about the problems I had with my John Lewis Partnership card I had a message from John Lewis Customer Services on Twitter to contact a ‘senior manager’ at the Financial Services.

That was easier said than done.

First I had a rather long-winded conversations with a rather unpleasant person, who denied any knowledge of Twitter, ‘To be honest with you Madam, we would never have ‘blogged to you’ (sic) and I have personally never used Tweets (again; sic…), or even know what it is.’

I explained until I was blue in the face what Twitter was and that I’d been asked by a legitimate JL Customer Services Twitter feed to speak to a senior manager, ‘They are not available,’ came the reply.

After being put through to another, even more unpleasant person, I finally reached a supervisor. She at least knew what Twitter was but said they did indeed not use it and that the message I’d received about my partnership card constituted a breach of security. She would investigate and write to me.

‘You are going write to me? Not email?’ I asked, desperately. John Lewis and me had form in regard to Royal Mail. ‘Or I could call you,’ the woman said brightly (Hallelujah) and continued, ‘But I must warn you, there is absolutely no way we can re-instate your card.’

I put the phone down and felt my eyes fill up out of sheer frustration. After writing the blog post I’d accepted I’d no longer be a customer of John Lewis Partnership. It was only because of the Twitter message that I contacted them again, only to be treated in the same way as before.

I actually felt like hitting somebody or something, but the terrier looked so cute I just couldn’t, and there were no humans in slapping distance. (Where’s the Husband when you need him?) 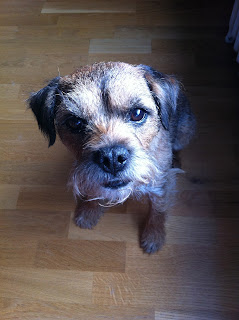 The next day I had a message on my mobile from a very friendly man calling himself a ‘senior manager’. He left a number to call him back. I didn’t – you can see why? Then the following day another call from John Lewis. This time the first thing the woman said was, ‘Sorry’.

‘I’ve looked through your records and I can see that it absolutely makes sense that you would not have paid your account if we didn’t send you statements. And I can see that this is totally out of character for you as a card holder.’ Or she said something like that. I thought I must be dreaming, and had difficulty in taking in all these kind words uttered by someone working for John Lewis Financial Services.

I pricked my ears when I heard this, ‘We have re-instated your card.’

‘Oh,’ was all I could say. After the initial shock I thanked her and also told her that I wasn’t in the habit of ‘outing’ companies on my blog – it was just that this one meant so much to me.

I am so happy.

Finally I must also thank you, my dear ‘real’ and ‘virtual’ friends, who took it upon themselves to post links to my blog on the John Lewis customer services pages. I am truly indebted to you!

I am now off to buy a new red floaty dress….from John Lewis, naturally.