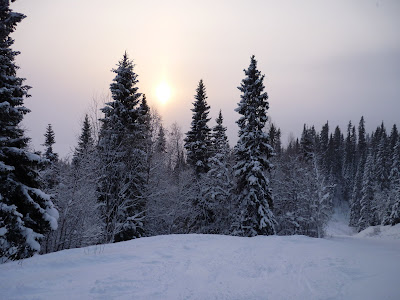 You may have noticed that I’m fairly partial to skiing. Most people think I’ve been doing it since I was a toddler, learning to ski between the legs of my father or mother like those cute little things you see on the slopes nowadays. But no, I didn’t learn to do downhill until I was in my twenties. And then it was the Englishman who introduced me to it. Quite fitting as it was the English who started this slalom lark in the first place. (OK my Swedish, Finnish and Norwegian friends, I know you’ve been doing it for centuries too but commercially speaking I do think it was the British who thought of it first…no hate mail please…)

But of course I’ve been skiing – that is cross country – since I was four. In Tampere where I grew up it was almost the same as learning to walk, you did it as soon as you were able. I had my first own skis for my fifth birthday, which is in late April. The fact that all but a few specs of snow had melted on the field outside our house didn’t stop me from wanting to try out my new lovely bright red skis (my very favourite colour when I was little). My father agreed but my mother worried I’d ruin them on the mud. Of course there was no stopping me then.
At seven I was so good at skiing I won competitions at school, unless I waited for my friends to catch up with me, which I often did. I was really uncompetitive. Or plain stupid. (I’m blonde). I’ve been working hard on developing a competitive streak since, but that’s another story and involves another favourite sport: golf.
But back to Åre and downhill. We’ve been coming here for over ten years, ever since we were introduced to the place by our very good friends. The children learned to ski here. The place has grown a lot during this time, new lifts have been added, new transport routes developed between the different areas and many more cafes and restaurants built. The 2007 World Cup was hosted in Åre and for that the centre was almost entirely revamped.
Because of its latitude, the best skiing here is in March when the pistes are open later. In December the skiing time is short and in order to catch the best conditions you need to be up for the first lift at 9.30. By three o’clock in the afternoon the light starts to fade. It’s therefore vital to plan your return journey to avoid skiing in the dark (dangerous and not so much fun) or end up taking an expensive taxi to the (ski-in) chalet. If you’re skiing with some-one it’s quite a good idea to communicate your plan to the other party before you set off.
Of course I knew all this.
But planning ahead and communication with a partner has always been a tricky thing for me. Especially when you’re feeling a little fractious from a late night, missed the best of the snow due to a very late start and enjoyed your wine a little too much during lunch….
I have to take my hat off to the Englishman who actually complained very little when I missed our planned rendezvous at the ski bus stop and carried onto another lift further down, which meant we had to then cross a few pistes, find a uphill gap between another two pistes, walk with our boots and skis down a road and uphill to the ski chalet. Not only did he not complain (much), he also carried my skis most of the last bit. All I’ll say in my defence is that I thought we’d decided to ski all the way back in spite of the fading light and lift closures, and that there was a person with the same colour ski jacket as the Englishman, who started down the wrong piste, only to disappear when I got to the lift.
Thank goodness for mobiles, how did we ski (or communicate) before they were invented (by Finns – only joking)?
I leave you with some more pictures, the last one of the Englishman (I think). 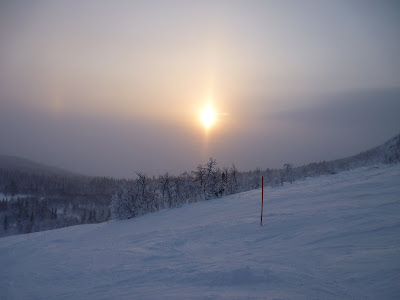 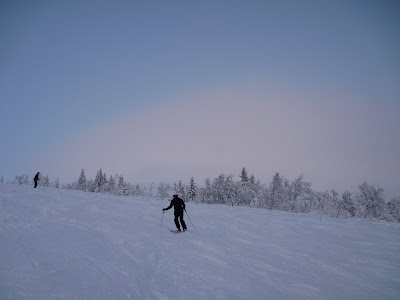 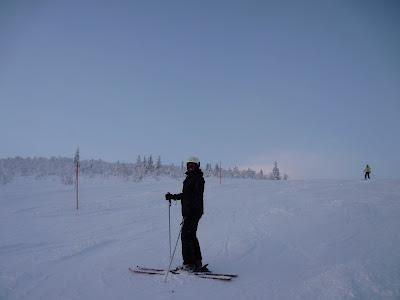 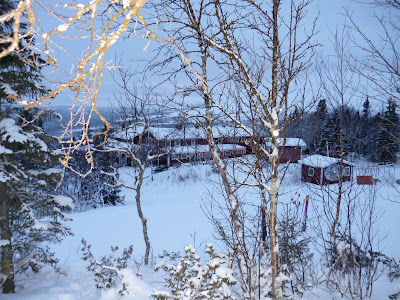 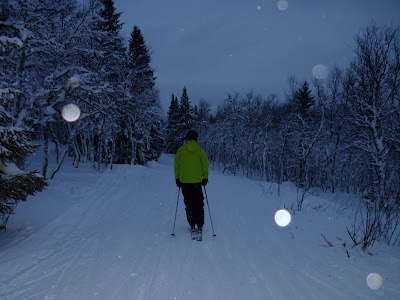