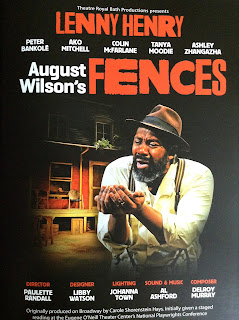 On Tuesday when I saw Lenny Henry talk about his latest play, Fences, on BBC London News, I immediately wanted to go and see it. I love him and I also love the post-war era of the Great American Play, though I’d never seen any of August Wilson’s plays.
Later that same afternoon something remarkable happened. The Travel Team at Finnish Guild Travel(where I work a couple of days a week) often get last minute offers to London plays and guess what, I was asked if I’d like to go and see Fences that very same night. ‘Of course!’ was my immediate reply.
Last time the Englishman and I saw Lenny Henry on stage was in Bath. I think it was his first comedy tour sometime towards the end of the 1980’s and he was brilliant.
In Fences, Henry doesn’t play a very loveable character. He’s in the role of a life-weary bin man called Troy Maxon. While Troy tries to appear strong and determined, he is also weak and duplicitous. He wants to stand up for what is right, but often ends up hurting the people he most loves.
The whole of the play is acted on a single set, in the backyard of Troy and his beloved Rose’s (Tanya Moodie) house in Pittsburgh, in 1957. Rose wants Troy to finish putting up the fence around the house, and this task of protecting the family from the dangers coming from the outside also becomes a metaphor for the main character.
But sadly, putting up a physical, or a metaphorical, fence doesn’t stop the outside world from coming in, or anyone in the family being affected by outside events.
There are conflicts between Troy and his sporting son, Gabriel, played by Ako Mitchell. Troy doesn’t want his son to suffer the same discrimination and disappointment he himself suffered and so denies Gabriel the chance to even try to succeed. His other son from a previous relationship, Lyons (Peter Bankole), wants to be a musician, but even this career is not safe enough in Troy’s eyes. At the same time as he disapproves of his off-springs’ career choices, he himself is getting involved in something he shouldn’t. Eventually Troy’s actions come to light and destroy his friendship with his Friday drinking partner, Jim Bono (played by the excellent Colin McFarlane). 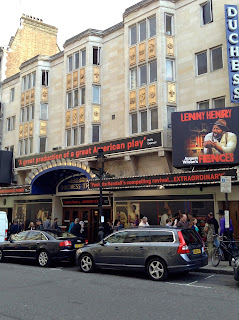 But Fences is about so much more than just the life of the main character. It’s about the changing social structure of America, it’s about race, about justice and about fairness. And ultimately about love and forgiveness too; and about how life and the need for survival changes a person.
The performances in this serious play were outstanding. I came away thinking that I had not only seen a remarkable play, but also some extraordinary performances. I was on the edge of my seat for the whole time. (The brilliant seats we had in the stalls helped the experience too, thank you Encore Tickets).
The audience at this play was a real mix, which was more than refreshing. It made me realise that the theatre we generally see is incredibly white and middle class. It’s about time this changed.
I was the guest of Encore Tickets
Fences is at DuchessTheatre
until Saturday 14thSeptember 2013