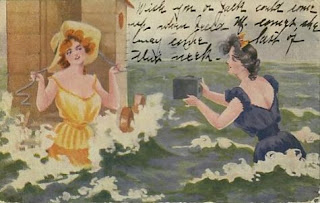 There’s now concern that young girls send photos of themselves via their mobiles (disrobed as it were) to their boyfriends. So called sexting. When the relationship breaks up, the boyfriend shares these pictures with all and sundry. The consequences can be tragic and the dangers are obvious.

But this is not a new phenomenon.

When I was engaged at the tender age of 16, my boyfriend liked to take photographs. He did a lot of hunting and shooting and therefore spent a lot of time in the forests surrounding Helsinki. Photography was part of this hobby.

He also liked to take photos of me.

Needless to say when the Englishman came into my life – see posts here – I was very keen to get the negatives and the photos back. But he wouldn’t do it. He gave me the prints, which I promptly destroyed, but in spite of several attempts at being nice to him (not in that way – shame on you, reader) and pleading with him, he maintained that as the injured party in the break-up, he was entitled to the negatives.

Even now, nearly thirty years later, I still regret having been so stupid as to allow this.

I have no evidence that he ever shared the photos with anyone. Nor do I believe he did. But just the knowledge that he still has access to them makes me shudder. I’ve not spoken with him for all this time, and I am not about to. So what am I to do? Just continue ignoring the issue and hope I never starred as ‘Reader’s wife’, or that I never will. I hope that the quality of photography is such now, that the pictures wouldn’t be usable. Or, that sanity prevailed with my ex and he did indeed keep them locked up as he promised and has by now destroyed them.