Some days start less well than others…this morning, just as I was getting ready to go out with the terrier for his early walk, I realised I’d left my wellies out on the balcony. (Even in London, the woods get muddy!) Wearing just a t-shirt and a pair of leggings, I rushed to get the keys to the window locks, opened the door and stepped out. For a moment I got distracted as I surveyed the progress of my plants. (The rain has not been kind to my tender herb seedlings). That’s when I heard the sound of a soft click. I knew straight away what had happened, because only a few nights ago for some unaccountable reason I’d lain awake thinking about this balcony window/door and the possibility of a scenario just like the one I was in now. ( I am really a witch, you see.) 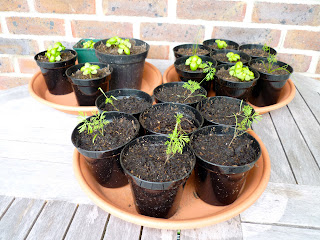 Because some of the floor to ceiling windows of our new flat are designed to open in several ways; you can tilt them, or open them as doors to the balcony. What I’d noticed was that if this balcony door, being open, accidentally shuts to, the mechanism at the bottom locks automatically. So the door is therefore not shut but also locked.

Now, standing in my bare feet and t-shirt on the first-floor balcony, I went to try the door and yes, it was indeed locked – from the inside. There was no opening mechanism on the balcony side, and the other door to the balcony was also locked. I had no phone on me, and no keys to the other door, just the window lock keys. Why, I wondered, as panic rose in my chest, did that balcony door have a separate key? What madness had made these people design a door which shuts itself? In my mind I went through my options. I tried to force the door, with the terrier watching me from the inside. (By now the dog is used to all sorts of antics from me and didn’t look at all surprised that I was trying to kick the door in. Says something about my life?). When the door wouldn’t budge, I noticed a toy tennis ball, which the terrier had left on the floor of the balcony. I could try to hurl it into the garden of my neighbour on the other side of the building, although my ball throwing skills are notoriously poor. Or I could try to break the glass? It was unlikely that the double glazing would shatter from the force of a soft ball – besides, I really didn’t want a broken window on my hands as well. So it had to be the neighbours. But what if they weren’t at home, or wouldn’t notice a tennis ball being thrown into their garden. Besides, what apart from phoning the maintenance company (based in Surrey at least a couple of hours’ drive away), could they do?

I was getting cold.

At least, it’s not raining, I thought when I spotted a man walking on the school playground, beyond the communal gardens . ‘Excuse me?’ I shouted. It had occurred to me that just maybe, a maintenance man working for the building company might still be on site and he might – just maybe – have a general key to the flats. I explained my predicament to the the friendly man. He agreed to go and find somebody, and I waited.

By a miracle of miracles, the maintenance man was on site, but alas, had no general key to the flats. (Now when I think about it, I’m glad they don’t keep keys but at the time my heart sank.) I’d started shivering, when the man from below said, ‘I’ll go and get a screwdriver.’  Now there was a reason why this struck me as funny, and also didn’t give me any confidence that the maintenance man was my Knight In Shining Armour. A few weeks after we’d moved into the flats, we’d completed a list of items of snagging, which varied from water hammer on taps, to chipped glass panels on the very same balcony I was now confined to. We heard nothing for a few days, and then one afternoon when both the Englishman and I were working from home there was a knock on the door and this, the same maintenance man, holding a screwdriver aloft said, ‘Snagging?’  Needless to say he could not complete any of the 20 or so items on our list with the help of a lonely screwdriver.

But now, five minutes after the same maintenance man had returned with his infamous screwdriver, I was inside the flat again. The screwdriver did, as predicted, not do the job, but our maintenance man had apparently learned his lesson and also threw a large sanding file to me on the balcony. With the help of this, and some force, I managed to open the door from the outside.

The moral of the story? Never underestimate the ingenuity of a maintenance man, and take heed of any disastrous scenarios you think up in the small hours of the night. They might just happen to you one day. Spooky?