I knew this last bit of packing would really get to me. Not only because Son came home to spend the ‘last weekend in the house’ with us and last night we had a BBQ under the vine and watched the cows graze a couple of fields away, with dogs milling round chasing each other, relieved that the heat of the day was over. We were all tired from emptying out old boxes of stuff which we’d packed away at the start of the house refurb, in a vain attempt to cut down on the rubbish we keep. Because there’s one big flaw in this down sizing process: we never throw ANYTHING away.

On top of that we aren’t as organised as it would appear. When I was leafing through old, now defunct paperwork of bills and ten-year-old plane tickets I’d for some weird reason had kept in a box called ‘Travel 1995-1997’ I came a cross a home-made Mother’s Day card from daughter aged 5, as well as a get-well soon card (undated) when I’d hurt my wrist. This amongst defunct tickets, a ten-year-old brochure for Sun City in South Africa, and maps for everything from LA to Paris to the Northernmost part of the Norwegian coast (don’t ask: this was ‘an adventure’ Husband took the whole family on in the days when I still let him make decisions about holiday destinations). It was the get well card that made me crack, you may understand why.

This is the front 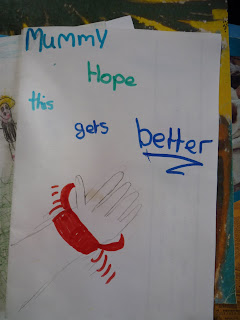 And this is what it said inside… 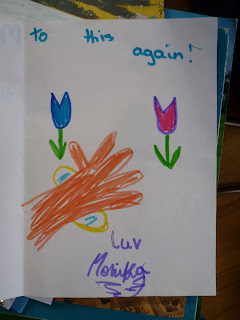 In another box, Daughter found a tiny christening gown. ‘What cheapskates; you used the same gown for both of us?’ I explained it was Victorian and antique. She nodded, unconvinced, and asked where she should put it. ‘I hope you’ll use it for your children too,’ I shouted after her and felt old. 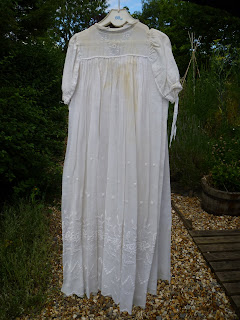 Today we have more such treasures to find. How I wish I was an organised person and wouldn’t have these sudden reminders of the past happy time in this house, because at the end of this process I might not have any tears left. And we still have the moment to come when we have to deliver the Labrador to his new home. At the moment, only four days before it has to happen, I cannot even think about it.

I’m glad we have this picture remind us of how daft this dog is: he found a new bed we’ve bought for the Terrier. Though funny, even this made me cry, it’s as if he was trying as hard as he could to fit into our new, down-sized life. Oh no, here are the tears again. 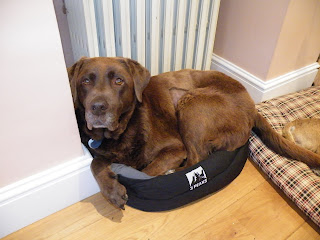