We’ve been focusing on Highgate in North London recently as a possible area for our next abode. Until today, when we spent the best part of the rainy day there, I didn’t really know the area at all. Some twelve months ago when we knew little of where in London we’d like to live, we drove around taking in Highgate, Crouch End, Gospel Oak, Tufnell Park and Dartmouth Park in one late afternoon. During that same whirlwind tour of North London, I dismissed Highgate as ‘too busy’. Having now seen it on two separate occasions, both times on foot, I really don’t know how I could have come to that conclusion. The High Street is busy, obviously, but it’s so near the Heath, and with some fantastic views over London wherever you look, it’s really growing on me.

I guess after living in London for a year, my idea of ‘busy’ has also changed.

Anyway, having spent the morning looking at flat after flat, dodging the rain, by twelve o’clock we were in severe need of refreshments and were pleased to see that a branch of Cote Brasserie had opened at the bottom end of Highgate High Street. This chain of French style restaurants is owned by Richard Caring, of Caprice Holdings, who own the Ivy, Le Caprice and Scott’s on Mount Street (among others), and have a majority holding in the highly successful Soho House chain of private member’s clubs. As we sat down to order from the shortish breakfast menu, I could see Caring’s magic touch in the food, decor and the customer service.

I had my usual going-out-breakfast; smoked salmon with scrambled eggs. The eggs were soft and runny; just salty enough and just creamy enough to satisfy my by then huge appetite. The salmon too was excellent: fresh and smoky, just the way I like it. When I asked for a wedge of lemon, it was brought to me without complaints or shrugs. So often staff take a negative attitude if anything out of the ordinary is requested by a customer. Here the service was keen and friendly, yet not too pushy or artificially jolly. 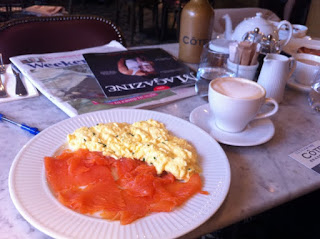 The Englishman had pancakes with fresh fruit and bacon. That too looked delicious. Had I not been so famished, I would have tasted his food, but in my hurry to get my tummy filled, I forgot. 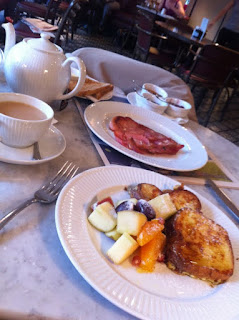 The existence of a little piece of the Soho House chain magic in Highgate will definitely weigh positively in the balance when we finally decide where our next home in London will be.

The Wolseley, the Alcatraz and 25 years of marriage.