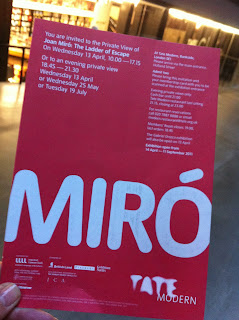 Tate Modern has been my favourite London art gallery for a long time, so when we moved up here one of the first things I did was to become a member. At £52 per year it didn’t seem such a huge cost especially as Daughter had just started to study History of Art. Perfect excuse….except it’s taken me (not Daughter who almost lives there when back in London) six months to visit the gallery, let alone take advantage of the many members’ events. Shame on me.

Last night I finally made up for lost time and, with an excited Daughter in tow, took the tube to the South Bank. It was she who dragged me out of the house having spotted the bright red invite to a private viewing of the Spanish artist, Joan Miro’s work. And wow was it worth it! I won’t try – with my limited knowledge of art – to explain the ins and outs of the exhibition, except to say that I felt truly moved by the bright canvases on display. As usual we both rented the audio guides, which were very well done. Sometimes these can be overly boring, or even too superficial, but this time I felt well informed about the artist, the era and his work.

Miro’s bright triptychs in Room 10 were particularly stunning in bright blues. I also loved The Constellations from the 1940’s. Because I didn’t know Miro’s work very well I didn’t realise how much of what he did was political, or the other way around, how much Spanish civil war and Franco’s dictatorship affected his work. This exhibition, as well as displaying the paintings and sculptures of a great modernist master, also brought to life that era of the country’s history.

When we came out of the exhibition rooms into the high-ceilinged hall area, I felt as if I’d seen a really brilliant film, or read an atmospheric book about Spain.

It’s a wonderful perk to be able to see an exhibit like this, before it even opens, but as luck would have it there’s a competition just put up by the lovely ladies at A Little Bird blog to see Miro at The Tate this spring.

As for me, I’ve promised myself to make at least a monthly visit to one of the Tates – I’m ashamed to say I’ve never even been to Tate Britain. Ouch…