On our last day – a Sunday – in Paris this January, Big Sis and I decided to have a long leisurely lunch close to the hotel before our scheduled departure on Eurostar back to London later that same afternoon. The trains had been cancelled the day before due to a lorry fire in the freight tunnel, but all seemed to be in order when we sat down to enjoy our aperitif or a glass of champagne (we were in Paris after all).

But then I had the fateful text: “Your train has been cancelled”.

What to do? I tried to telephone the number on the text, but was told the queue was 1/2 hour long. “There’s also plenty you can do online,” said the friendly Eurostar lady on the automated message, so I decided to enjoy our lunch and see what I could do on my laptop later.

I’m glad I did, because when a couple of hours later I telephoned again, it took over 4 hours to get through to change our booking (and no, you couldn’t do it online). By that stage we’d rebooked our lovely room at the Crowne Plaza, and were resigned to another night in Paris. (What a hardship!)

But before we knew about the frustrations of Eurostar delays, we concentrated on (what we thought was going to be) our last lunch in Paris.

As soon as we’d stepped into the Astier we liked the look of the place. Traditionally French, the service was friendly and extremely courteous. There were delicious-looking meals being enjoyed all around us, and looking at the menu, we had great difficulty in deciding on what to have. 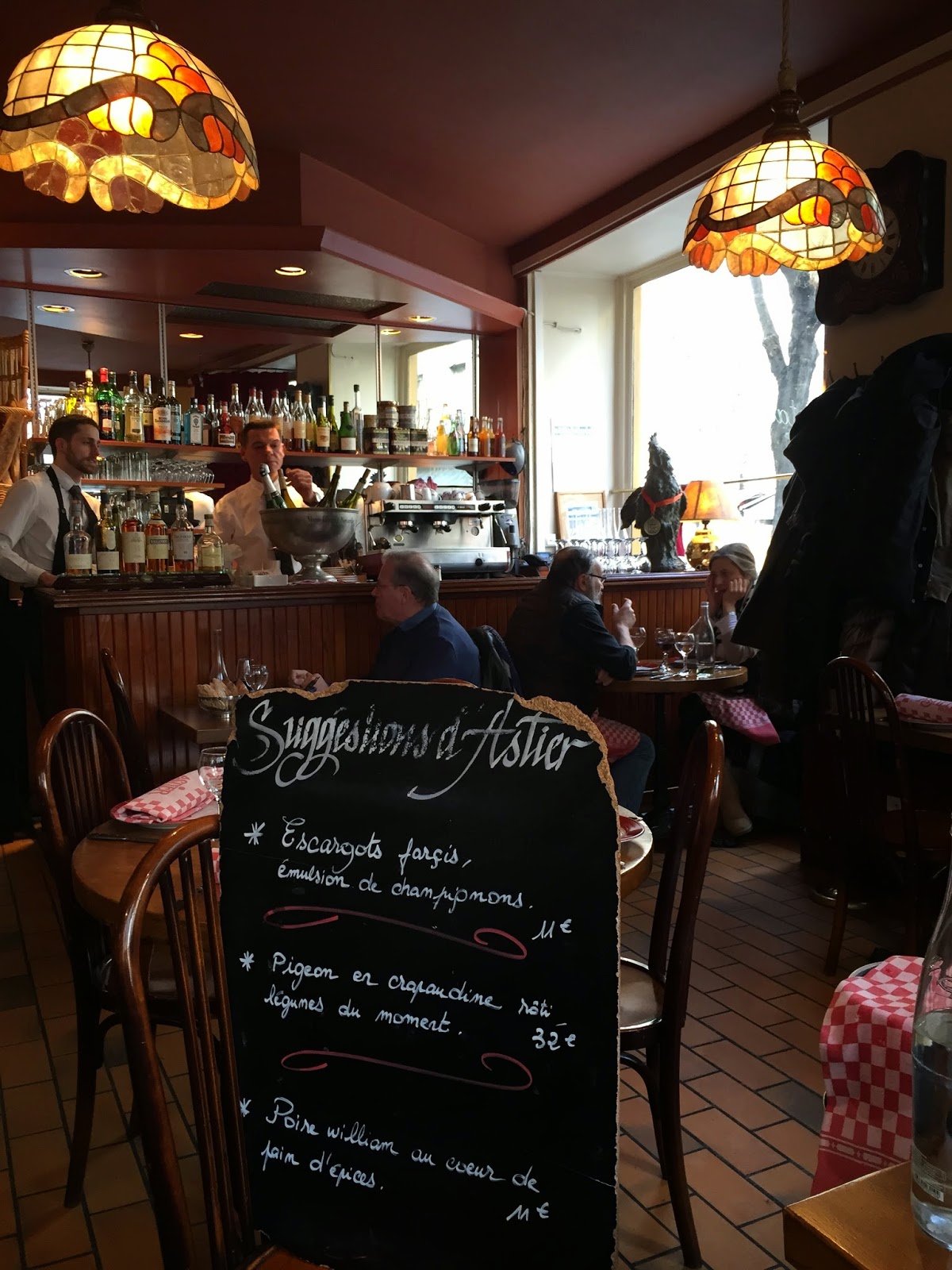 Eventually Big Sis chose the marinated herring to start, while I had the pumpkin soup, which was topped with cabbage and bacon bits. Both were  absolutely delicious, but better was to come. 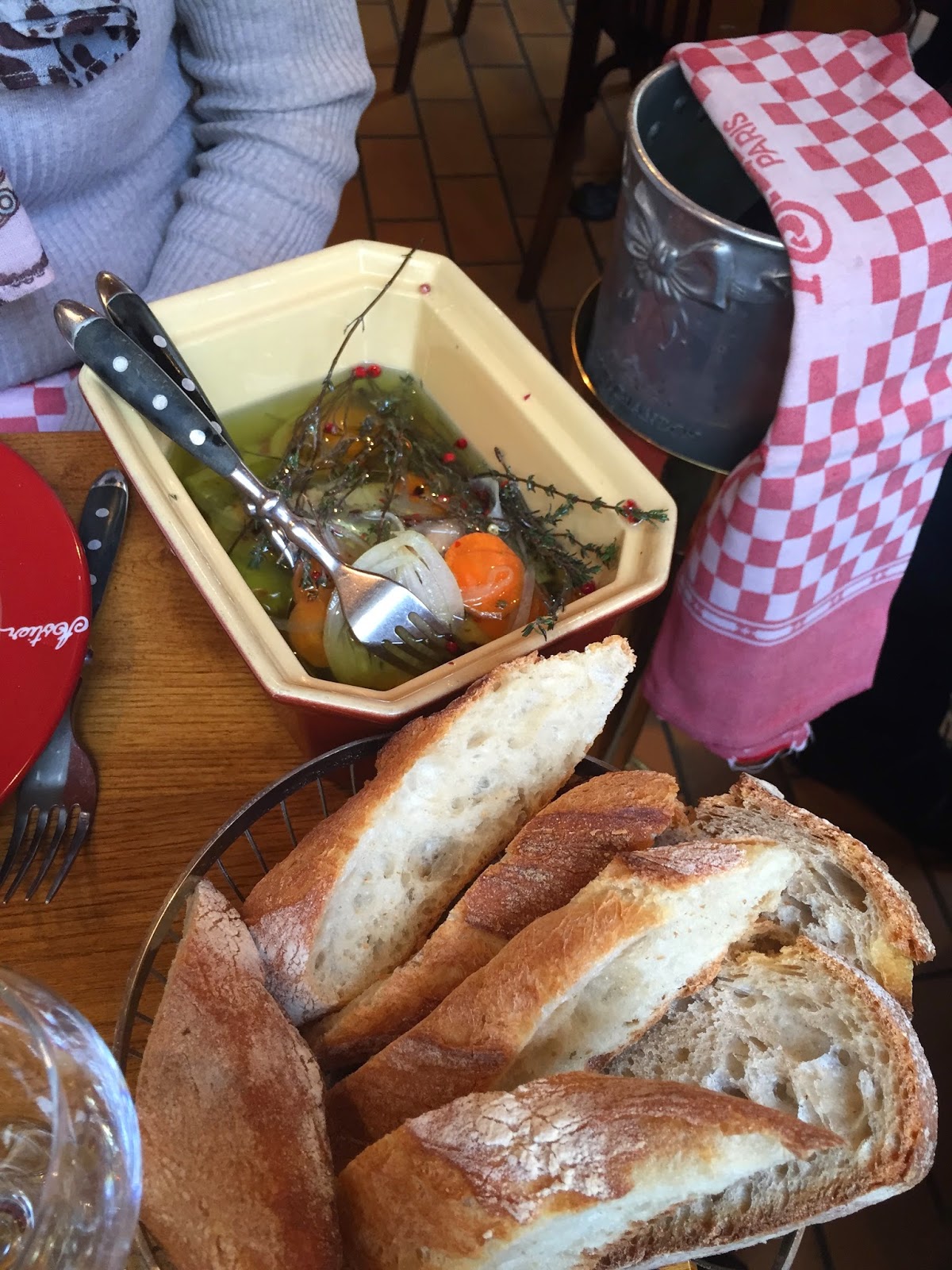 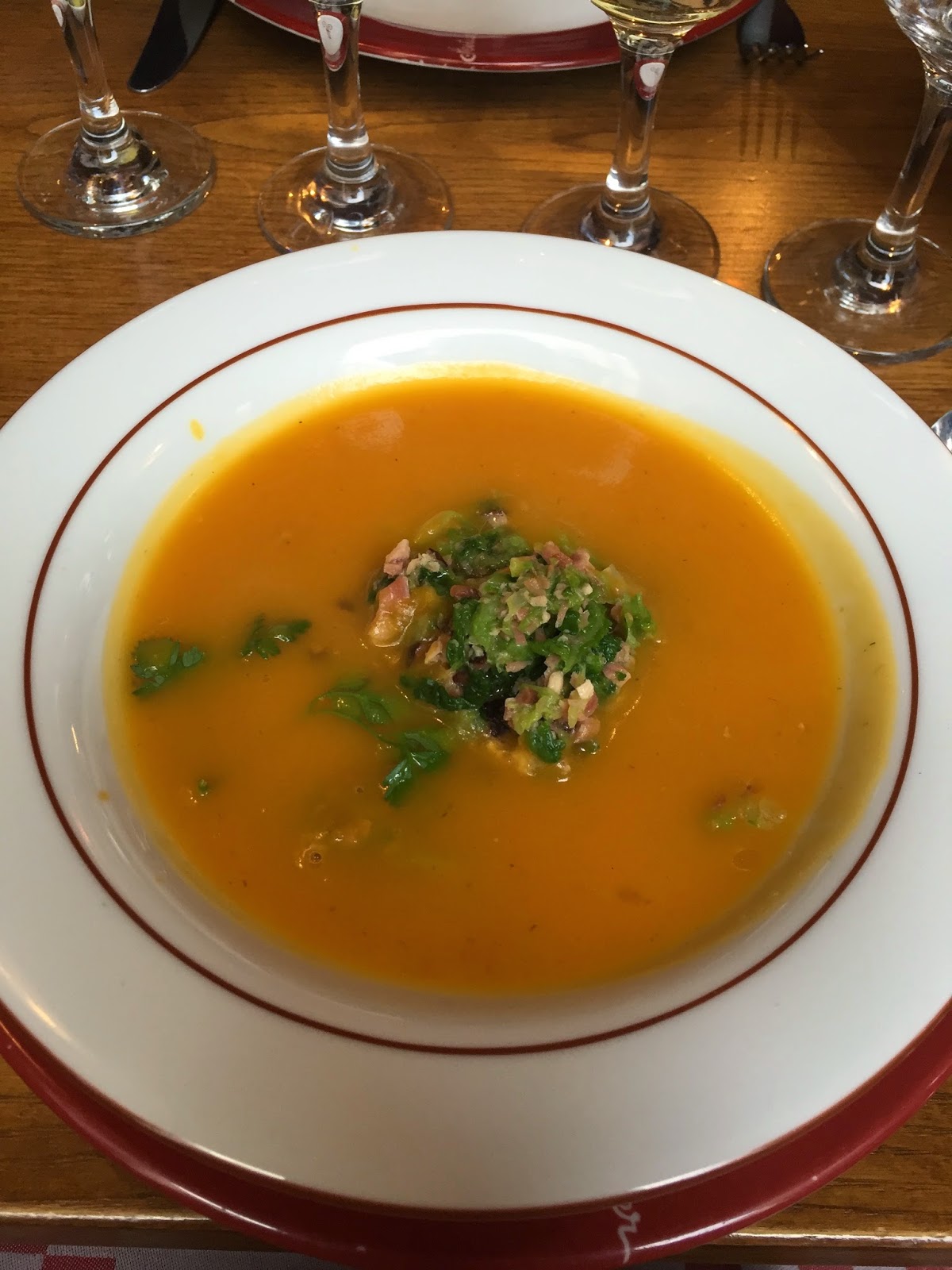 We both had St Jacques Creme Laitue, or scallops in lettuce cream sauce, something we’d spied being enjoyed by a neighbouring table. The scallops were cooked to perfection, and the creme sauce was light and very, very tasty. 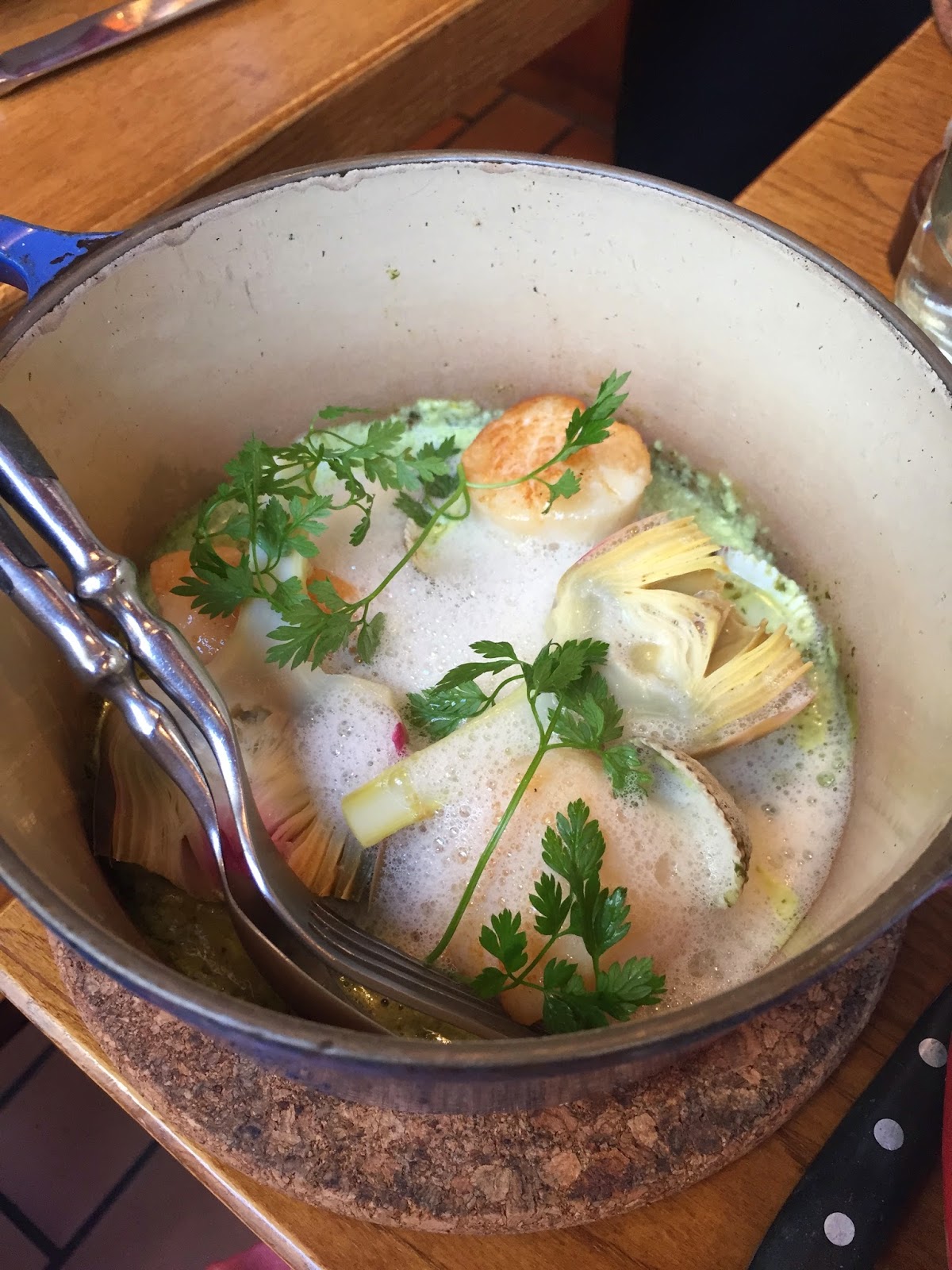 By pudding we had to say no to cheese, something which I’m now regretting back in London, where cheese is routinely chilled to a much too low a temperature, and hence often tasteless. (I know these are probably European rules, so differently applied in different countries.) 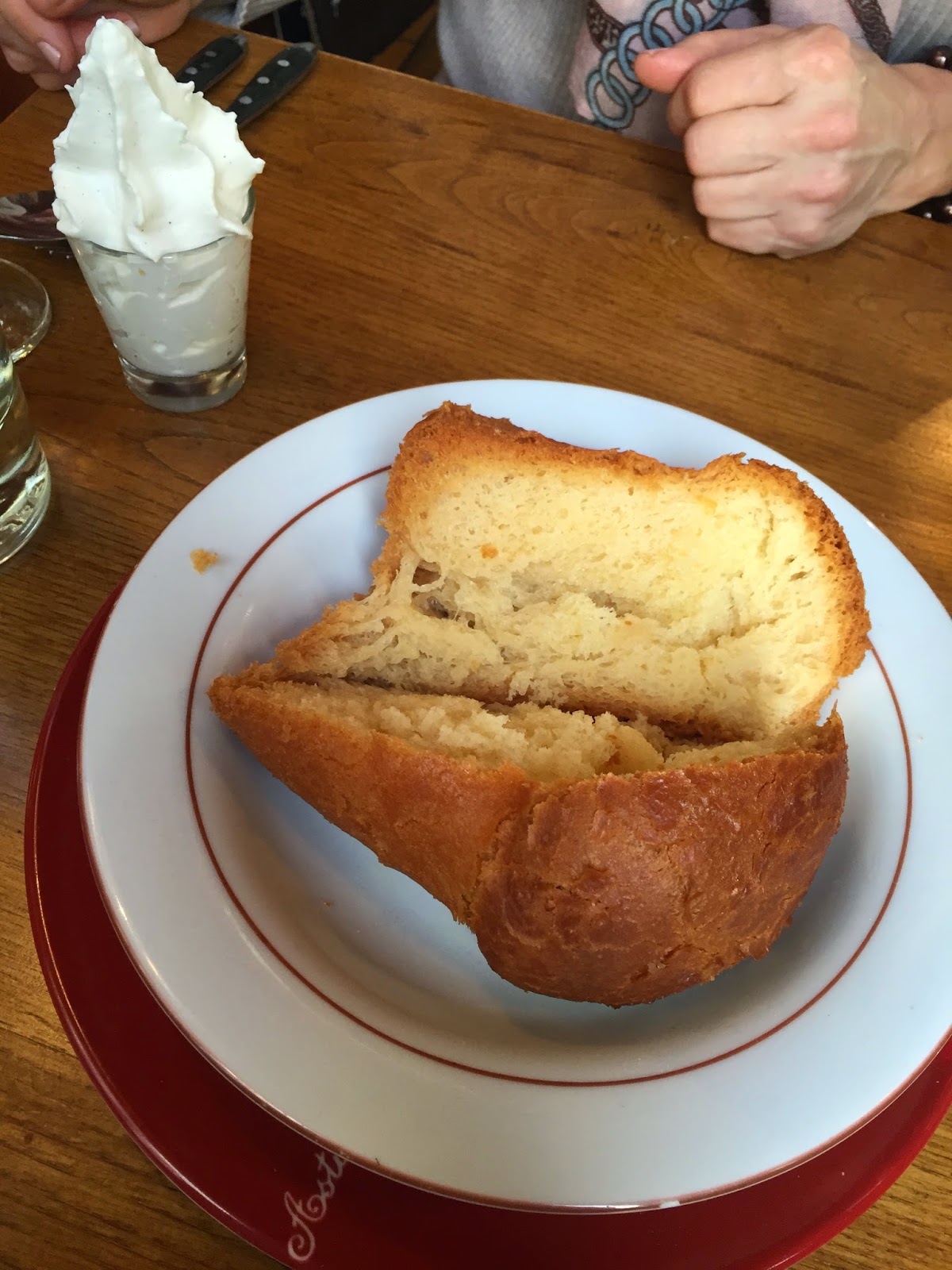 But when our friendly waiter showed us the pudding menu, and I spied the words “Baba au Rhum”, I convinced Big Sis that we should share one. And my, was I glad we did. The dough in the baba was light and fluffy, the rum poured over it deliciously boozy, but still sweet enough, and the Chantilly cream as light as newly fallen snow. 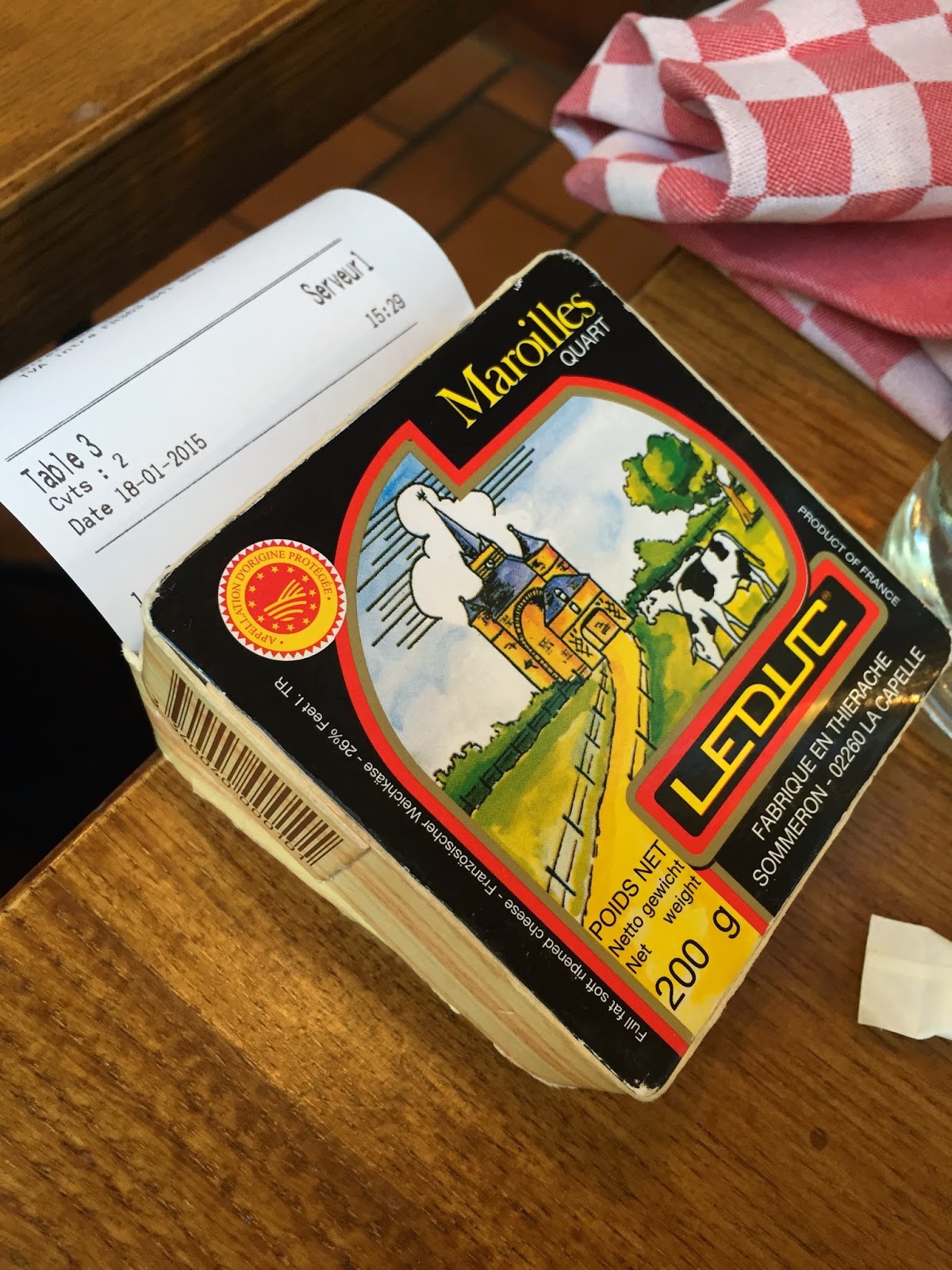 We’d arrived quite late for our lunch (at two pm), and as we were finishing our Parisian feast, the tables around us were emptying. In spite of this, at no point were we made to feel that we were imposing on the staff, who by now must have been there beyond their working hours. When I asked what time they closed, the answer was a shrug “Whenever it suits you”.

A Gallic shrug can sometimes be so comforting.