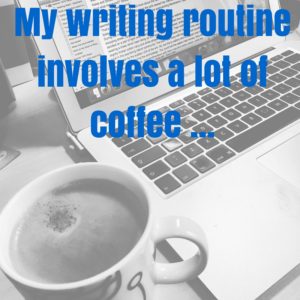 Since I became full-time author/entrepreneur five months ago, I’ve settled into a routine to make sure I don’t stay in my dressing gown for the whole day (which is always a distinct possibility).

It was doing the NaNoWriMo back in November, which started me off in the right direction.

The task of writing 2,000 words every day for a month was a little daunting, so I decided to change a habit of a lifetime and get up an hour or two earlier than usual, and this habit has stuck – or sort of.

I don’t get up as early as I did during the marathon writing month of November, but instead of the five thirty wake-up call, I now get up around 6, or 6.30am, which means I’m at my desk with a cup of coffee by 7am at the latest. I know this is pretty lame, because I’m aware that many people get to work early, even those often hated bankers are usually at their desks by 6am.

But for me waking up early is a real life-changer.

Between 7am and 9am, for about two hours, I just write, trying (that’s the operative word here, trying) not to look at emails, Twitter or other social media. I manage this most days, and if I don’t, I try (again) not to beat myself about it too much. But if I don’t get any words down in the morning, because of some urgent email or online comment, I sit down in the afternoon and make up the day’s word count, or editing target.

I aim for 1,000 words per day, and usually manage that. With editing, it’s harder to define the target, but I manage about 1-2 chapters of 1st draft edits, more on a 2nd draft and so on. Lately I’ve taken weekends off (I know), but if I get a quiet moment when The Englishman is at White Hart Lane watching Spurs play (that’s soccer for my American readers), or appearing at one of his stand-up comedy gigs, I sit down and write.

Writing is my hobby, my job and my passion.

By around 9am the terrier starts to complain, so I take him for an hour’s walk in the woods, and when I’m back, I sort my emails, deal with marketing stuff, or work on editing, or perhaps design the layout of paperback copies of my books. I’ve just finished working on The Navy Wife paperback, as well as a new version and cover of The Englishman. (Both are now out, click here to get your copy.)

I often don’t get up from my desk until gone six, again it’s the terrier who rules my finishing time – his 2nd outing needs to happen before seven in the evening.

Now the month of November is over, NaNoWriMo are running Now What Month -initiative where you get help with the editing process, and even advice on how to publish your novel. Orna Ross from the Alliance of Independent Authors is here in discussion with Grant Faulkner Faulkner from the National Novel Writing Month. Have a listen, I learned a lot about the charity, as well about the editing process from theses two.